Liberman: Palestinian housing plan 'not a prize for terror'

“This program improves security, it is not a prize for terror,” says Defense Minister. 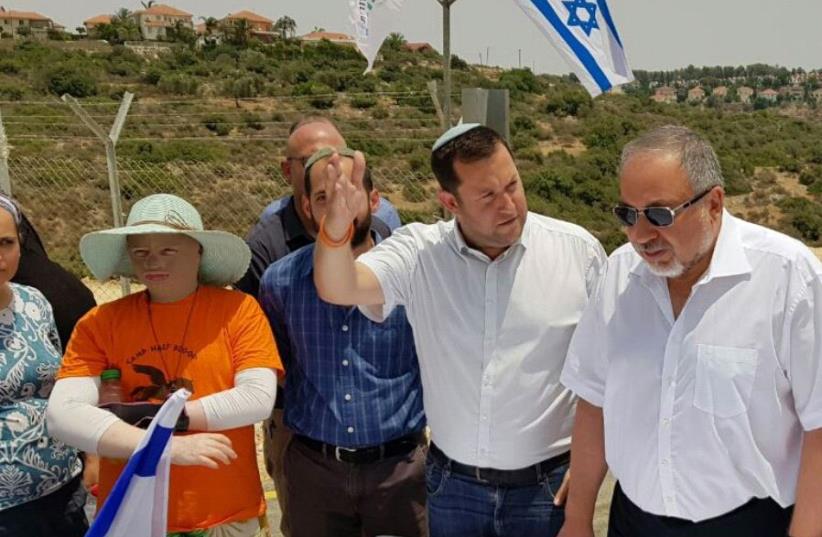 Defense Minister Avigdor Liberman (R) and Samaria Regional Council head Yossi Dagan
(photo credit: ROI HADI)
Advertisement
A plan to expand the Palestinian city of Kalkilya into Area C is not a prize for terror, Defense Minister Avigdor Liberman said on Wednesday in advance of a cabinet vote on the matter later in the evening.“This program improves security, it is not a prize for terror,” Liberman said as he stood on the outskirts of the Ma’aleh Shomron settlement, a short distance away from Kalkilya. He visited the area to inaugurate a new road between that settlement and the nearby community of El Matan.Together with Samaria Regional Council head Yossi Dagan they poured over a map of the area, that was set up on a plastic folding table.He had first learned of the plan to build 14,000 homes in Area C  for Kalkilya residents through a chance visit to the Civil Administration.“We’re talking about a plan to triple the city with 14,000 homes,” Dagan said.Liberman interrupted him, “not 14,000, we are even unlikely to get to 6,000.”“No, 14,000 its written [in the plan],” Dagan said.“Let it go,” said Liberman, “It’s my office that is going to authorize this.”Pointing to the map, Liberman explained that the construction in question which would include 1,000 homes that had already been constructed, involves private Palestinian property that would never be used by Israelis.It is part of a “carrot and stick” program formulated with top IDF commanders and backed by IDF Chief of Staff and the head of its military intelligence to reward those cities that have not engaged in terror activity, Liberian said.“When we talk about security lets listen first to those who are responsible for security and not those [politicians] who are always thinking about elections or primaries,” Liberman said.But Dagan took issue with the description of Kalkilya as a city whose residents had not attacked Israelis, noting that it was a Palestinian terrorist from Kalkilya who had killed US army veteran Taylor Force, 29, in a stabbing attack on the Tel Aviv beach front last year.Among those who came to speak with Liberman about the Kalkilya project was Ayala Shapira, 14, who survived a nearby terror attack in December 2011 and for whom the new road is named.Her father was driving her home to El Matan from a math club meeting for gifted students when a Molotov cocktail was thrown at their car.Still suffering from burns sustained in that attack, she wore a gauze mask on her face and a large rimmed straw hat on her head.“Why do the citizens of Israel have to work so hard to get permission to build when we authorize thousands of homes for our enemies,” Shapria asked.Dagan also weighed in on that issue, noting that many of his communities lacked permits for building projects. Liberman said that this year, Israel is building, planning and authorizing construction in settlements in Judea and Samaria.“I do not remember a time when construction activity occurred at this rate,” he said.“We hope that by the end of the years thousands of homes would have been built and thousands more have been marketed,” Liberman said.He spoke amid reports that the Trump Administration had asked Israel to contain settlement activity while authorizing building for Palestinians in Area C, who have received very few permits in past years. The Higher Planning Council for Judea and Samaria is debating the Kalkilya plan, which already received security cabinet approval last year. But ministers who supported the plan, including Prime Minister Benjamin Netanyahu, have said they did not realize its scope. Under pressure from Bayit Yehudi party head Naftali Bennett, Netanyahu agreed to bring the plan back to the security cabinet.The plan's opponents have argued that any section of Area C, in which urban Palestinian growth is allowed, would inevitably become part of any future Palestinian state. In addition, they have contended that the plan places the Palestinian homes close to the security barrier, a move that would endanger the Israelis on the other side of the barrier.The vote is expected to be close and its political opponents, including Dagan, spent Tuesday night attempting to sway ministers to reject the plan.