On Sunday, the Prisons Service announced that it would change its rules about attorney visits after former prime minister Ehud Olmert got caught using “attorney-client privilege” as an excuse. 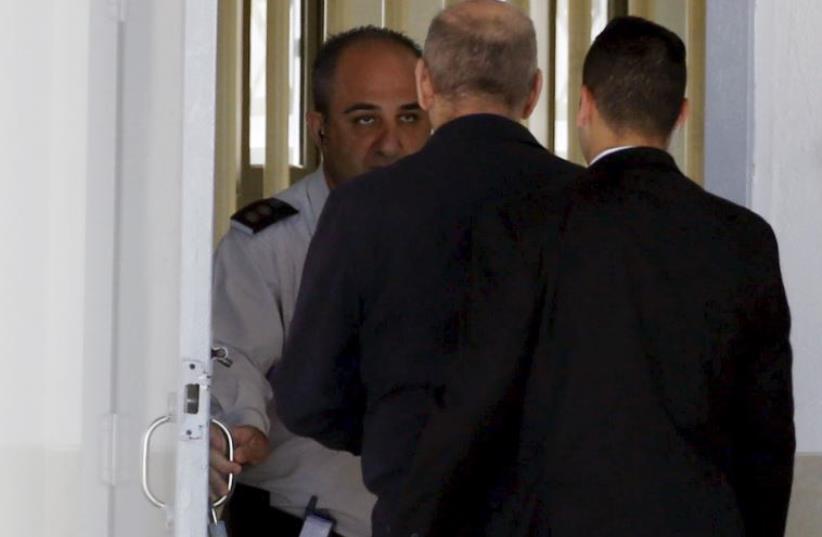 Former prime minister Ehud Olmert (C) enters Ma'asiyahu prison near Ramle
(photo credit: REUTERS)
Advertisement
Israel Bar Association president Efi Naveh on Wednesday threatened to take the Prisons Service to the High Court of Justice if it does not back off announced changes in policy to limit visits by defense lawyers to client prisoners.Naveh objected to the service issuing the regulations on Sunday without coordinating the issue with the Bar Association.He said that the lawyers association would “weigh all necessary measures for defending the professional interests of its members, the rights of its clients and the rights of prisoners.”On Sunday, the Prisons Service announced that it would change its rules about attorney visits after former prime minister Ehud Olmert got caught using “attorney-client privilege” as an excuse to have 37 friends with law degrees visit him in Ma’asiyahu Prison in Ramle, where he is serving a prison sentence of at least 19 months for bribery.Prisons Service spokesman Assaf Librati told The Jerusalem Post on Sunday that the service caught wind of the “illogical” number of lawyer visits only after Channel 2 and other media outlets asked for details. He confirmed that Olmert had received visits from 37 different lawyers or law offices purporting to represent him and that “while this may be legal, it isn’t logical.”Librati said that, following a decision by Public Security Minister Gilad Erdan, the service is implementing procedures that would limit the number of visitors to a maximum of three lawyers or law offices in the same week, who would have to show a power of attorney for the inmate.He said it is also weighing a requirement that the lawyers show receipts indicating the prisoner has paid for their services. The meetings will be limited to around an hour, Librati said.Responding to the bar association’s threat, the service on Wednesday said that “the right of prisoners to meet with a lawyer is meant in order to provide them with a professional service. The exploitation of this right has driven the IPS [the Israel Prisons Service] to bring up this issue in order to deal with its misuse, without harming the right of prisoners to receive legal counsel.”