After not even reaching the BSL final for the first time since 1993 last season, the new look Maccabi has plenty to prove, especially against the reigning champion. 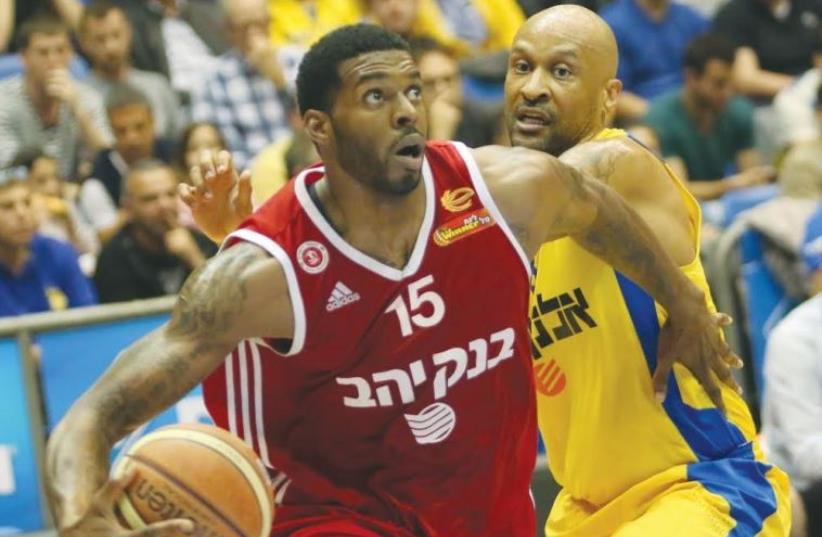 Hapoel J’lem’s Donta Smith and Mac TA’s Devin Smith
(photo credit: ADI AVISHAI)
Advertisement
Both Maccabi Tel Aviv and Hapoel Jerusalem enter Sunday night’s showdown at Yad Eliyahu Arena looking to make a statement.While the outcome of the contest is unlikely to have any significance by the end of the regular season, both teams are desperate to improve to 3-0 in the BSL and establish their supremacy early in the campaign.After not even reaching the BSL final for the first time since 1993 last season, the new look Maccabi has plenty to prove, especially against the reigning champion.Hapoel beat Maccabi in two of three meetings last season, including by 30 points at the Jerusalem Arena and by 16 points at Yad Eliyahu in their most recent clash in March.However, both teams have since undergone wholesale changes, especially Maccabi. Only five players came back for another campaign (Yogev Ohayon, Devin Smith, Sylven Landesberg, Guy Pnini and Brian Randle), with Randle set to be out for up to a month due to illness. Ike Ofoegbu was brought in last week to bolster the team’s frontline, signing a two-month contract which could be extended until the end of the season.Jerusalem maintained much of the core of the roster which led the side to an historic championship last season and looks to have an even better group of players this term following the additions of E.J. Rowland, D’or Fischer and Matt Janning.Rowland was superb in Jerusalem’s Eurocup win over Neptunas Klaipeda of Lithuania last week, with Hapoel winning its first two BSL games by an average 15.5 points.Also Sunday, Maccabi Rishon Lezion, which is the only team other than Maccabi and Jerusalem to open the season at 2-0, hosts Maccabi Kiryat Gat. On Monday, Hapoel Eilat makes the long trip to Ironi Nahariya, Ironi Ness Ziona hosts Bnei Herzliya in a clash between two teams at 0-2 and Hapoel Tel Aviv visits Maccabi Haifa in a showdown between two sides which lost their last game but have high aspirations for the season.