There were also major traffic disruptions in Jerusalem. Residents and tourists also faced major obstacles to foot traffic in the Old City. 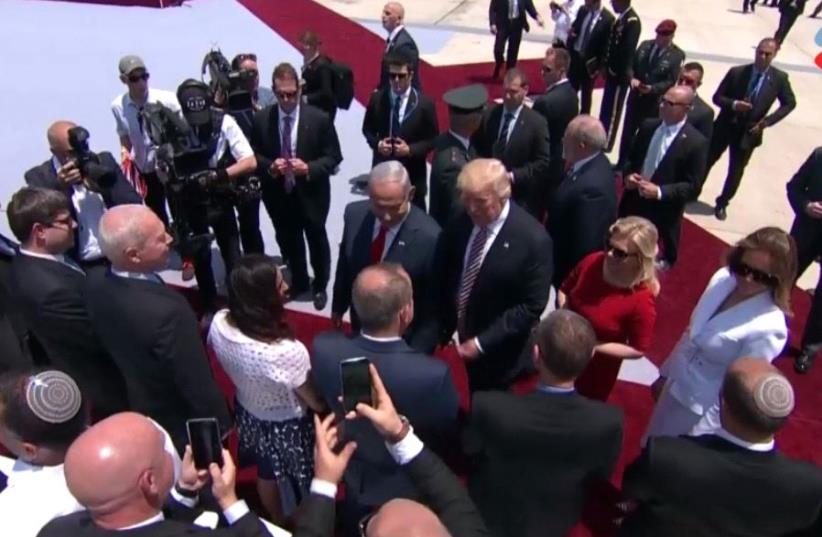 US President Donald Trump and his wife Melania shaking hands with Israeli ministers
(photo credit: screenshot)
Advertisement
Israel Police completed the first day of a complex and wide-ranging operation to secure US President Donald Trump’s visit in Israel.Thousands of police officers, including undercover and special operations units, joined in the operation termed “Blue Shield” that began shortly before Trump touched down at Ben-Gurion Airport on Monday afternoon.The operation focused on the Jerusalem area, where Trump visited the Western Wall and the Church of the Holy Sepulchre in the Old City and where he was staying at the King David Hotel.“There has been no incident and we are working in full coordination with undercover and special patrol,” police spokesman Micky Rosenfeld said. Shops were closed in the Old City, “in order to make sure that the security can be implemented.”The largest disruption for Israeli citizens came as the major Tel Aviv to Jerusalem thruway, Route 1, and another major highway, Route 6, were both closed for a little under an hour.While Trump traveled to Jerusalem by helicopter, the routes were closed to ensure an alternate route in case he was forced to travel by car.There were also major traffic disruptions in Jerusalem.Residents and tourists also faced major obstacles to foot traffic in the Old City.“From the morning hours, thousands of Israeli police, border police and volunteers deployed throughout the city of Jerusalem, the main routes and the Ben-Gurion Airport area, to maintain public order...security and... to regulate and direct traffic, while placing minimal [disruption to] the routine life of the public.