While making history is a lot in of itself, it is not enough to achieve what Trump seems to really want – to broker the “ultimate” deal. 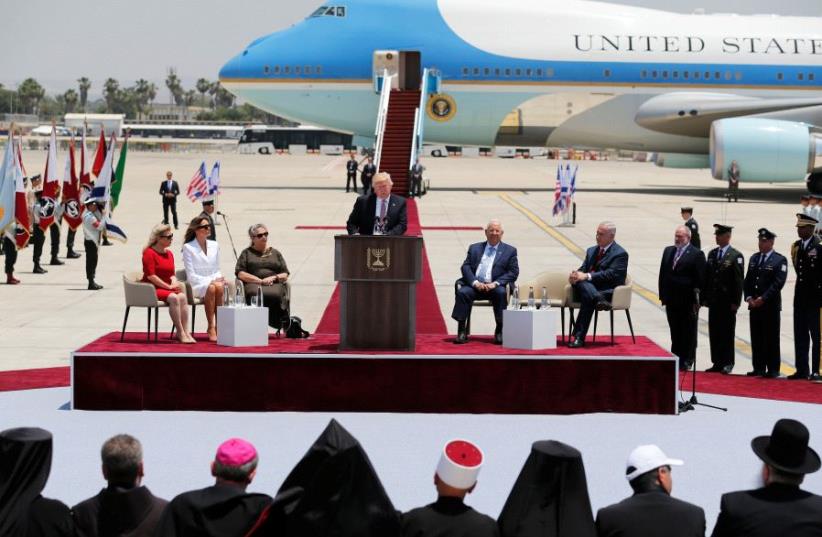 US President Donald Trump (C) speaks during a welcoming ceremony upon his arrival at Ben Gurion International Airport in Lod near Tel Aviv, Israel May 22, 2017
(photo credit: REUTERS)
Advertisement
US President Donald Trump made history three times on Monday.He started by taking the first direct flight between Riyadh and Tel Aviv. As countries without formal ties, direct commercial flights do not exist between Saudi Arabia and Israel.Second was when Trump became the first sitting president to visit the Western Wall, the holiest site for the Jewish people. While the visit alone does not mean that America is suddenly changing its policy vis-à-vis Jerusalem and now recognizes it as Israel’s capital, it is a huge step in that direction.Lastly, Trump made history simply by coming to Israel.While Richard Nixon, Jimmy Carter, Bill Clinton, George W. Bush and Barack Obama all visited Israel at some point during their stints as president, none did so early in their term, let alone on their first trip overseas.But while making history is a lot in and of itself, it is not enough to achieve what Trump seems to really want – to broker the “ultimate” peace deal between Israel and the Palestinians.What Trump will learn during his short visit to Israel is that one of the main challenges to making peace is getting Israelis to believe that their security is taken into account.Israelis are disenchanted with the prospects of new withdrawals.They recall the pull out from Lebanon in 2000, which brought the Second Lebanon War six years later, as well as the disengagement from the Gaza Strip in 2005, which has resulted in terrorism and rocket fire since.This trip – so early in his presidency – seems designed to give Israelis the feeling that Trump has their back. The appointment of David Friedman, a staunch pro-Israel activist, as the US ambassador to Israel, as well as Trump’s son-in-law, Jared Kushner, as the main envoy to the region, are additional examples.All of these together are meant to give Israel confidence and a feeling of security so it can then make moves toward peace.The so-called “confidence- building measures” that the Israeli cabinet approved on Sunday are not really aimed at restarting peace talks. They are steps that could have happened without Trump’s visit.What they were designed to do was make Trump believe that Israel is not the party to blame if and when the peace process once again fails, as both sides seem to believe it will. Friedman apparently shared a similar assessment with his boss before departing for Israel last week.The Palestinians are doing the same. Dropping preconditions before engaging in talks is also aimed at getting Trump to believe that they are prepared for peace and willing to sit down and negotiate like never before.Basically, both sides have little confidence in the chances to achieve a peace deal, and are simply preparing for the blame game they expect will erupt after the talks – if they even get started – fail. Trump waded into this skepticism on Monday, and many in Israel and the Palestinian Authority wonder why he thinks he will succeed where so many presidents have failed before him.Time will tell. But for now, making history is a good start.