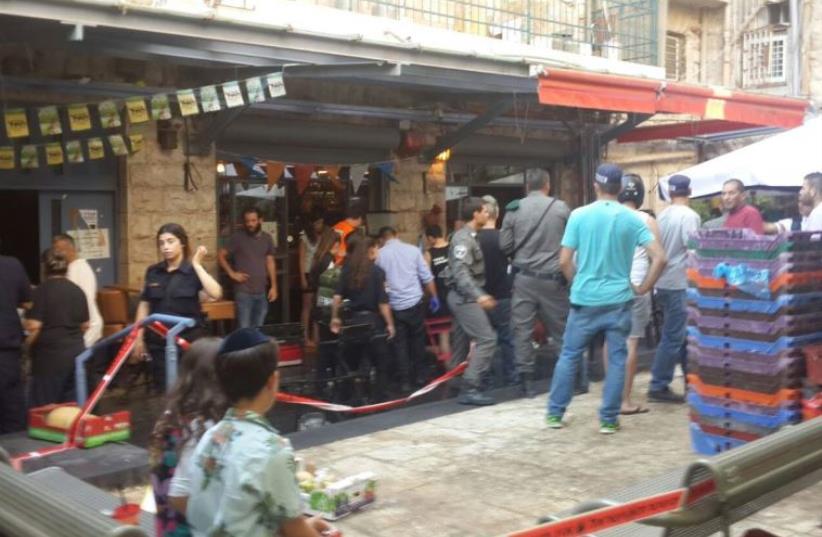 shuk shooting
(photo credit: TAZPIT)
Advertisement
A feud between a green grocer and bar owner at Jerusalem’s Mahaneh Yehuda market escalated into violence Friday when the grocer’s son, a soldier, allegedly shot the bar owner in the leg after the latter attempted to seize his gun.Despite initial reports that the shooting was terrorist-related, police spokeswoman Luba Samri said the altercation at the market, popularly known as “the shuk,” was a criminal matter and that an investigation has been opened.The confrontation was the result of a longstanding dispute between the 20-year-old soldier’s unidentified grocer father and the 25-year-old bar owner, The Jerusalem Post’s sister publication Ma’ariv reported.When the two business owners had a heated argument on Friday afternoon, the grocer’s son became involved, at which point the bar owner allegedly attempted to take his weapon, resulting in the soldier shooting him, Ma’ariv reported.It remains unclear what the dispute was about.Following the shooting, the soldier attempted to flee the scene, but tripped and fell to the ground near the market’s exit. He was arrested moments later by police.Meanwhile, the bar owner was treated by Magen David Adom paramedics before being transferred in good condition to Hadassah University Medical Center in Ein Kerem, police said.The market closed early because of the violence.