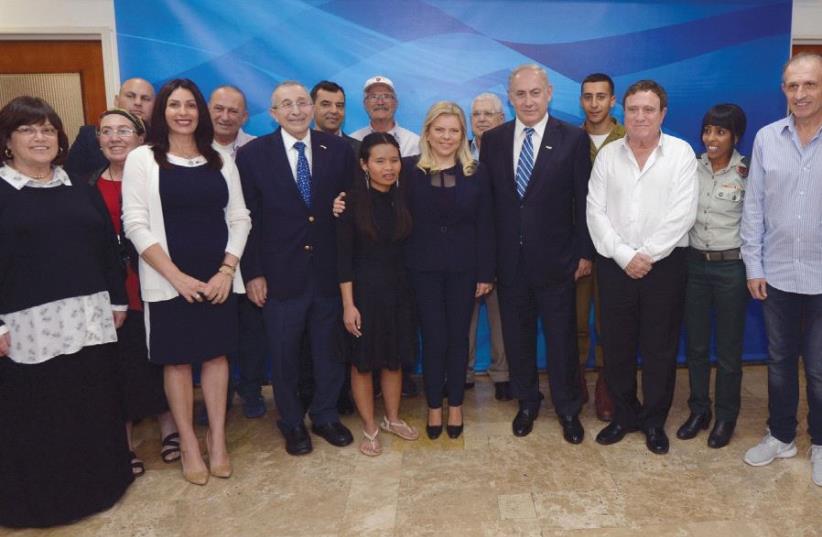 THE TORCH LIGHTERS The Independence Day torch lighters meet with Netanyahu and his wife Sara in Jerusalem
(photo credit: HAIM ZACH/GPO)
Advertisement
Each torch lighter at the Independence Day ceremony on Mount Herzl has a unique connection to the capital, which was chosen as the theme ahead of the 50th anniversary of the reunification of Jerusalem, Two figures from the Diaspora will also be lighting a beacon – which will be dedicated to the Jewish people.The committee bestowed the honor upon founder of the Simon Wiesenthal Center Rabbi Marvin Hier and cofounder of Taglit-Birthright Israel Michael Steinhardt.Here are all 14 torch lighters: Yaakov (Yaki) HetzHetz received the Medal of Courage for his role in the Battle of Ammunition Hill in 1967, and later worked for Rafael Advanced Defense Systems, receiving the Israel Defense Prize for his work there.Maj. Yaros Shigot Shigot, an Ethiopian olah and head of the information department at the education and youth officer’s headquarters. She is active in initiatives that seek to bridge societal gaps.Eli Mizrachi Mizrachi spearheaded the renovation process of the capital’s bustling Mahaneh Yehuda market, injecting it with modernity while taking care to preserve the authentic character.Dina SamtaSamta, 19, an Indian olah from the Bnei Menashe community, is a volunteer at Jerusalem’s Jewish Institute for the Blind, though she is blind herself.Lt. Dean ArgilArgil joined the Paratrooper Brigade, like his grandfather, becoming a commander in the “Viper” battalion. Dean’s grandfather Mordechai Abergil fought in southern Jerusalem during the Six Day War.Miri Ehrental Together with her husband, Ehrental founded the Jerusalem-based Zichron Menachem association for children with cancer, in memory of their son Menachem who died from cancer.Amnon Shashua Shashua is a computer science professor at the Hebrew University in Jerusalem and cofounder of the autonomous driving start-up Mobileye, which was recently bought by US chip giant Intel for $15.3b.Amhed Eid Head of the general surgery department at Hadassah- University Medical Center on Jerusalem’s Mount Scopus, Eid performed Israel’s first successful liver transplant in 1991. He also helped set up the Israel Transplant Center.Yehoram GaonActor, singer and radio personality, Yehoram Gaon comes from one of Jerusalem’s most veteran families, and the city center features in much of his work. In 2004, he was awarded the Israel Prize for Hebrew song.Rabbanit Chana Henkin Henkin is the founder and dean of the Jerusalem- based Jeanie Schottenstein Center For Advanced Torah Study For Women. Her son and daughter-in-law were killed in a terrorist attack near Itamar in 2015.Uri MalmilianFormer soccer player Uri Malmilian is one of the most prominent symbols of Israeli sport. Born in Jerusalem’s Mamilla neighborhood, Malmilian spent many years playing for Beitar Jerusalem before jumping ship to rival Maccabi Tel Aviv. He is considered one of Israel’s best players ever.Rabbi Marvin HierHier is the founder of the Simon Wiesenthal Center, which strives to fight antisemitism and preserve the memory of the Holocaust. In January, Hier delivered a prayer during US President Donald Trump’s inauguration.Michael SteinhardtSteinhardt is a cofounder of Taglit-Birthright, as well as a prominent philanthropist who supports Jewish and Israeli causes.Eli AmirAmir is a Jerusalemite writer and civil servant who made aliya from Iraq in 1950. His books provide a window into life in Jerusalem and throughout Israel in the 1950s and 1960s.