“The signing of the deal is a bitter mistake, an unfortunate, painful and infuriating, decision that ignores the suffering of the families,” said Abera’s brother Ilan. 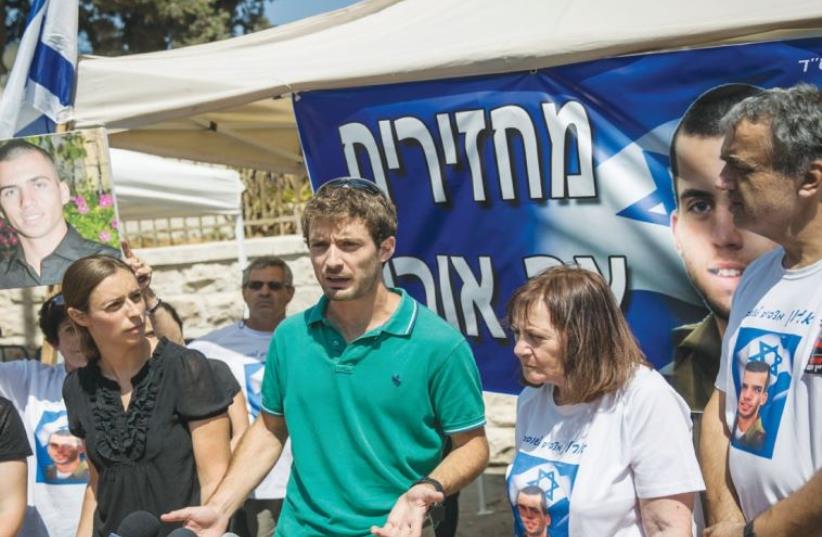 PARENTS OF Lt. Hadar Goldin and St.-Sgt. Oron Shaul, who were killed in the Gaza Strip during 2014’s Operation Protective Edge, hold a protest yesterday outside the Prime Minister’s Residence in Jerusalem.
(photo credit: HADAS PARUSH/FLASH90)
Advertisement
The Israel-Turkey reconciliation pact is a “bitter mistake” that does nothing to return an Israeli citizen missing in Gaza and believed to be held by Hamas, the family of Avraham “Abera” Mengistu said on Wednesday.“The signing of the deal is a bitter mistake, an unfortunate, painful and infuriating, decision that ignores the suffering of the families,” said Abera’s brother Ilan.Ilan Mengistu said he hoped that the cabinet would take steps to help return Abera, the remains of IDF soldiers Hadar Goldin and Oron Shaul killed in action in the 2014 Operation Protective Edge, and a fourth Israeli missing in Gaza, but that “instead we once again have to make due with words and promises instead of actions.”He added, “Have you forgotten Abera? There is a Jew, an Israeli, who is alive and a prisoner in Gaza. Abera is waiting for us to rescue him. My brother did not vanish. He is being held by Hamas, and we must work now before it is too late.”Abera was last seen in Israel on September 7, 2014, when soldiers saw him climb the fence into the Gaza Strip.On Wednesday a senior Hamas official claimed that Turkey is mediating a prisoner swap between the Palestinian terrorist organization and Israel.In an interview with the Saudi news site al-Khaleej Online, an anonymous Hamas official said, “An important meeting between a big delegation of Hamas and Turkish intelligence took place in Turkey a few weeks ago to discuss a number of Palestinian issues related to the Gaza Strip, among them a possible prisoner swap.“Turkey is currently acting as a mediator to conclude a prisoner exchange between Hamas and Israel. It is making important moves and holding important talks, and it went to great lengths in order to reach a good launch point that will enable the parties to conclude a deal,” the official added.“Many obstacles prevent the parties from reaching an agreement, mainly Israel’s foot-dragging on giving Turkey official [sic] assurances regarding the prisoner swap,” the Hamas official said.According to the senior Hamas official, in a future prisoner exchange with Israel, all Palestinian prisoners who were arrested after being released as part of the Gilad Schalit deal in 2011 will be freed.The official added that “an announcement on a prisoner swap may take place during the upcoming months,” stating that the reconciliation deal concluded between Israel and Turkey will greatly contribute to the consolidation of a prisoner deal.