“From the moment of his release from prison, Elor became the most threatened person in Israel” 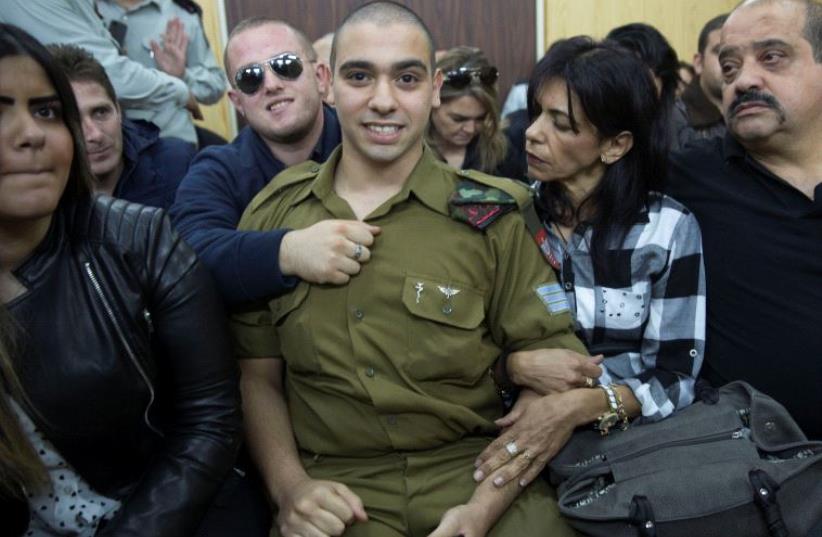 Elor Azaria sits to hear his verdict in a military court in Tel Aviv, Israel, January 4, 2017
(photo credit: REUTERS)
Advertisement
Elor Azaria, the soldier convicted of killing an incapacitated terrorist, must immediately be given a gun license, because he and his family have received threats from Hamas, Likud MK Nava Boker wrote Public Security Minister Gilad Erdan Monday.Azaria entered jail on August 9, after being convicted of manslaughter for shooting Palestinian attacker Abdel Fatah al-Sharif on March 24, 2016. He was released from prison May 8 after serving nine months of a 14 month sentence. He has not been permitted a license to bear a weapon because he has been convicted of a crime. Boker said Hamas and Islamic Jihad have been sending Azaria threatening letters with bullets.“From the moment of his release from prison, Elor became the most threatened person in Israel, and there is a real concern for his life,” Boker wrote Erdan. “Elor and his family have faced threats for two years. A Facebook post depicted him with a gun to his head. He should have a right to protect himself.”The Public Security Ministry responded to Channel 2, which first reported Boker’s letter, that Azaria needed to request the gun license on his own.Boker said in radio interviews Tuesday that if the gun license for Azaria was not approved, she would request special police protection of him and his family.Azaria became a household name after videos of the incident went viral and brought widespread international condemnation. The videos showed Azaria shooting the incapacitated terrorist while he was lying on the ground. Azaria claimed his shots were in self-defense, and he feared a possible knife attack or concealed explosive vest.Upon his release, Prime Minister Benjamin Netanyahu released a statement saying he was glad that the controversy was over.