Gordetski is currently on a hunger strike to raise awareness of her plight and that of others, in the hope it will spur action to resolve this problem. 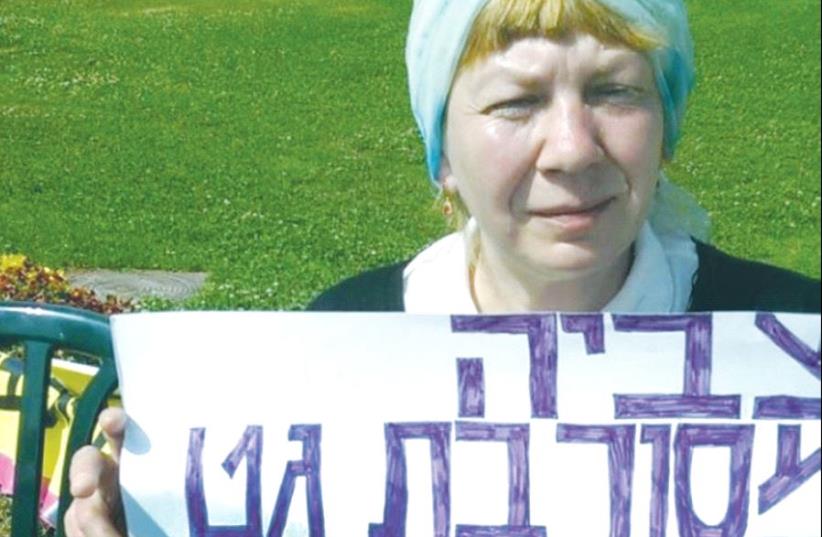 TZVIAH GORDETSKI holds a sign announcing her hunger strike outside the Knesset
(photo credit: OFFICE OF MK YAEL COHEN PARAN)
Advertisement
Zionist Union MK Yael Cohen Paran pulled her bill that would allow the state to annul Jewish marriages in some circumstances of divorce refusal from a vote in the Knesset plenum on Wednesday due to efforts to achieve an alternative solution to the problem.Paran has of late taken up the banner of overcoming the scourge of divorce refusal. She has in particular sought to assist Tzviah Gordetski, 53, a religious woman who has been refused a divorce by her husband for the past 17 years, even though he has served more than 16 years in prison for his recalcitrance.Gordetski is currently on a hunger strike to raise awareness of her plight and that of others, in the hope it will spur action to resolve this problem.Paran met with officials from the offices of Shas chairman and Interior Minister Arye Deri and Religious Services Minister David Azoulay on Wednesday to discuss legislative alternatives to her bill, which could then be supported by the coalition.Paran’s bill would allow the state to empower the rabbinical courts to expropriate the wedding ring or other item of monetary value that a husband used to marry his wife, thereby retroactively annulling the marriage and creating a situation in which the woman no longer needs a divorce from her husband.Although there is scope within Jewish law for this position, most leading rabbinical scholars, including moderate ones, do not believe that this is a valid solution for the divorce refusal phenomenon.Earlier on Wednesday, Gordetski and her supporters staged a small demonstration outside the Knesset ahead of the expected vote on the bill, and was visited by several lawmakers, including Zionist Union MKs Merav Michaeli and Revital Swid.Speaking to The Jerusalem Post at the protest, Gordetski said that several years ago she approached an Orthodox rabbinical court in New York called the Bet Din Tzedek Lebayot Agunot, run by Rabbi Moshe Morgenstern and earlier with the late Rabbi Emanuel Rackman.After hearing her case, the rabbis of the court issued Gordetski a “get zikui,” a bill of divorce on behalf of the husband, a special device within Jewish law which has been suggested as a method of dealing with divorce recalcitrance.This tool is, however, very controversial, and the circumstances of Gordetski’s case make the use of a get zikui even more contentious.Morgenstern’s and Rackman’s court was itself extremely controversial and enjoyed very little support from the Orthodox establishment, including Modern Orthodoxy.Gordetski tried to use this bill of divorce to register with the Interior Ministry as a divorcée, but officials there refused to do so and referred her to the rabbinical courts, which similarly refused to recognize the validity of the get zikui.Now she says that she needs to continue her fight in order to finally be free from her husband in a manner that leaves no room for doubt in terms of the religious validity of the divorce.“I want to be certain that I am a single woman in accordance with Jewish law, and so I can turn a new page in my life and begin a new relationship,” Gordetski said.“It’s hard to understand how the law can allow women to be injured so terribly, and the time has come to fix this, not just for me but for other women who are also denied a divorce, and for whom I do not want the same fate as what has happened to me.”Prof. Ruth Halperin-Kaddari, founder of the Rackman Center women’s rights group which has represented Gordetski in the rabbinical courts, said that her case demonstrates the urgent need for change in the realm of divorce recalcitrance.“The wretched situation of Tzviah Gordetski confronts Israeli society with the insufferable reality in which, after more than 16 years in which her husband has sat in prison because of his refusal to give her a bill of divorce, she is still not able to obtain her freedom and embark upon a new path,” said Halperin-Kaddari.