Earlier this week, Wallstrom called for an investigation to determine if Israel was guilty of extrajudicial killings of Palestinians during the current wave of terrorism. 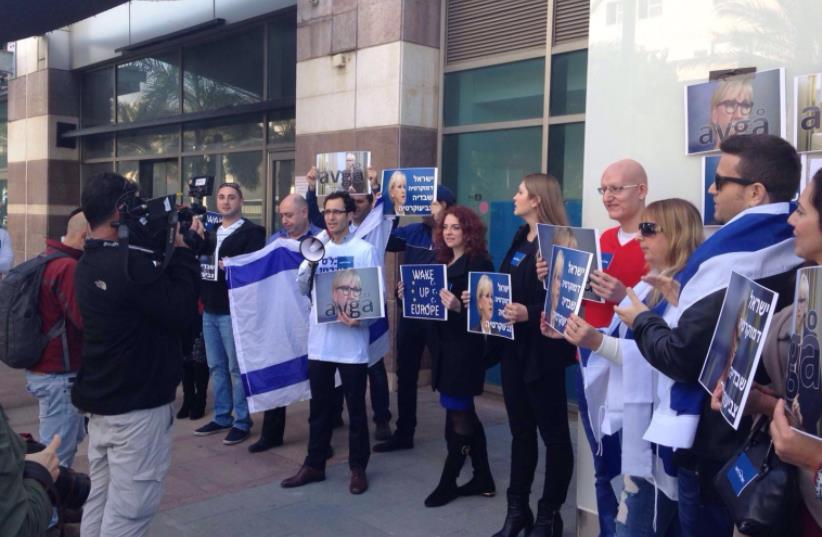 Protesters rally outside Swedish embassy, call for FM's resignation
(photo credit: YISRAEL BEYTENU SPOKESPERSON)
Advertisement
Yisrael Beytenu MK Oded Forer, along with several dozen youth activist from the party, held a rally outside the Swedish Embassy in Tel Aviv Friday demanding the resignation of its Foreign Minister Margot Wallstrom after she made remarks concerning the extrajudicial killing of Palestinians during a wave of recent violence. “The Swedish foreign minister, with her anti-Semitic remarks, proves that she has no understanding of the reality,” Forer said. “She closes her eyes in the face of terror, and will only wake up when the terror comes to her home. She ought to quit immediately.”Meanwhile, protesters chanted “Israel — democratic. Sweden — hypocritical,” and "Wake up Europe."Earlier this week, Wallstrom called for an investigation to determine if Israel was guilty of extrajudicial killings of Palestinians during a current wave of terrorism in which over two-dozen Israelis have been murdered. “It is vital that there is a thorough, credible investigation into these deaths in order to clarify and bring about possible accountability,” she said during a parliamentary debate, according to the Swedish news agency TT.In response, Prime Minister Benjamin Netanyahu called the comments “outrageous, immoral, unjust and just wrong.” He later added another adjective – “stupid” – though he stopped short of endorsing comments made a day earlier by National Infrastructure, Energy and Water Minister Yuval Steinitz, who intimated that Wallstrom’s comments were anti-Semitic.Swedish-Israeli relations have nose-dived over the past year since Sweden announced its recognition of a Palestinian state shortly after Wallstrom's center-left Social Democrats won general elections in 2014.On Wednesday, Israel announced that Sweden will not have any role to play in the Israeli-Palestinian diplomatic process as a result of Foreign Minister Margot Wallstrom’s hostility toward Israel, a Foreign Ministry spokesman said.The statement came as the ministry announced that its deputy director-general for Western Europe, Aviv Shir-On, called in Swedish ambassador Carl Magnus Nesser to protest Wallstrom’s comments.The decision to summons Nesser was made by Netanyahu, who directed Shir-On to protest not only the statements, but to register the government and the country’s anger at what they see as Sweden’s imbalance and hostile attitude toward Israel.Herb Keinon, Lahav Harkov and Reuters contributed to this article.