Likud MK Avraham Naguise, the only Ethiopian- born lawmaker in the new Knesset, warns against violence during protests. 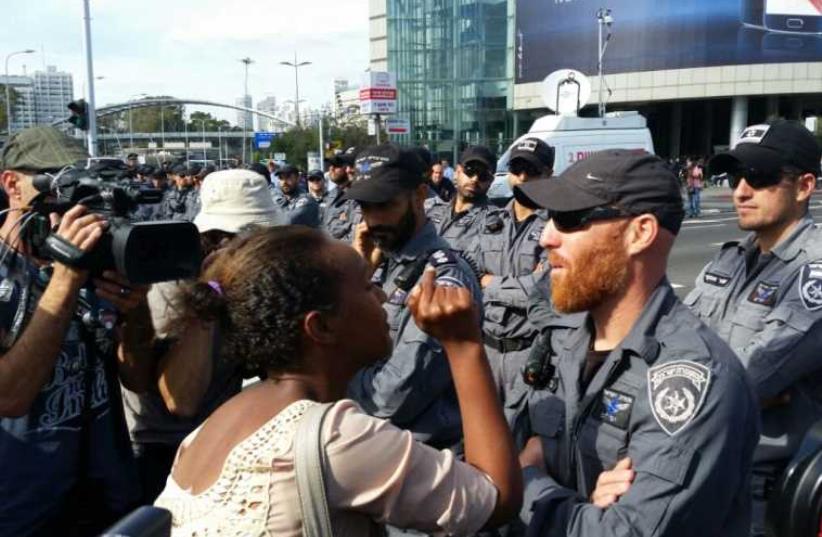 Ethiopian - Israel protest in Tel Aviv
(photo credit: BEN HARTMAN)
Advertisement
MKs from across the political spectrum joined the protest against racism and police brutality in Tel Aviv Sunday.Likud MK Avraham Naguise, the only Ethiopian- born lawmaker in the new Knesset, joined the protest, but warned against violence.“These demonstrations, as long as they are within the framework of the law and non-violent, are justified like no other and are a late wake-up call for the Israeli government to eradicate the distress of Israelis of Ethiopian origin,” he said.Naguise added that, not only is there an increase in police violence, but there is discrimination in the workplace, in buying homes, and in schools, where there are many segregated classes, and in addition the halting of Ethiopian aliya is keeping family members apart.“We must take care of these issues at their roots and I am in touch with the prime minister so we can do it together,” Naguise stated.MK Stav Shaffir (Zionist Union) attended the demonstration, calling it “not just for one population group, but for all of Israeli society.”“It cannot be that citizens of Israel are discriminated against in budgetary allocations, the education system, access to employment, housing – even by those who are responsible for their personal safety,” she said. “These brave young leaders are doing important work, not just for their community, but for all of us.”MK Yoel Razbozov (Yesh Atid) wrote a letter to Knesset Speaker Yuli Edelstein calling for him to urgently hold a meeting on the issue in one of the Knesset’s committees, although the committees have yet to be formed and Edelstein does not set their agendas.“Violence and racism are a national problem,” Razbozov wrote. “There must be an immediate and response by elected officials. This is not just the distress of a specific community, but of the whole country, and therefore, its importance is a matter of consensus among all factions in this House.”MK Ilan Gilon (Meretz) also took part in the protest, saying that Israelis of Ethiopian origin face police violence and that the police must investigate who instructed officers to attack a soldier last week.“The police must discuss and sharpen the regulations on inappropriate use of force at every level and bring a deep change in officers’ training…This topic should be discussed in the Knesset plenary urgently,” he added.Joint List MKs Ayman Oudeh and Dov Hanin also took part in the rally.