The protracted heat wave is expected to grip much of the nation until Thursday, with breaking records for electricity demand on Sunday and Monday. 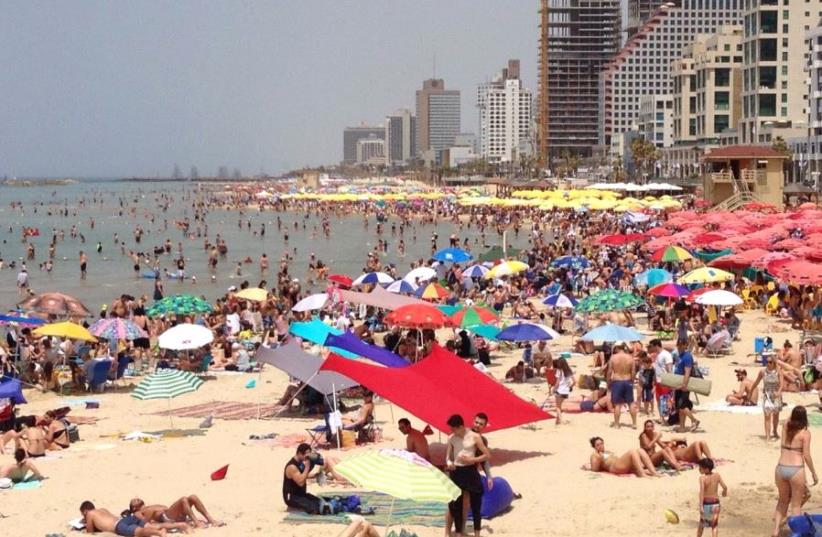 Thousands flock to Tel Aviv beaches during April 22 heat wave.
(photo credit: AVSHALOM SASSONI/MAARIV)
Advertisement
As the sun glimmered over a cloudless sky onto the sweltering pavement of southern Tel Aviv Monday afternoon, Moshe Ben-David, 88, used one hand to hold a miniature blue fan next to his lined face, and the other to spray it with water from a former Ajax bottle.“This is how we do it here,” he said, as his two octogenarian friends, sitting on lounge chairs in front of an electronics shop off a well-traveled store-lined street, nodded their approval.“It makes for a nice shvitz when it’s this hot,” he added knowingly.The protracted heat wave is expected to grip much of the nation until Thursday, with breaking records for electricity demand on Sunday and Monday.Over the weekend, United Hatzalah and Magen David Adom paramedics responded to over 100 emergency calls throughout the country due to dehydration, as temperatures continue to exceed 37°C.Noting that a heat wave can cause a person to lose up to 10% of their body weight, United Hatzalah spokesman and EMT Raphael Poch on Monday advised people to first and foremost remain hydrated. “Avoiding dehydration at all costs is critical, so drinking large amounts of water, or Gatorade, which has electrolytes, is key to staying hydrated,” said Poch, adding that “thirst quenching” drinks such as sugared colas and certain iced teas, can actually cause dehydration.Moreover, Poch cautioned that simply being in an air-conditioned space is not enough to ward off dehydration.“Even inside, you must continue to drink water,” he said.“However, people should not drink water from plastic bottles that have been exposed to the sun in a car because the plastic can melt, releasing toxins into the water,” he added. “So, if you have a bottle of water in a car, you want to put it in a cooler and not just leave it in the sun. If it was in the sun, don’t drink it, and throw it out.”The most vulnerable populations during heat waves include children, the elderly and outdoor laborers, including construction workers or police officers.United Hatzalah received at least four emergency calls over the weekend about children left in vehicles for extended periods.“The most important thing is to never leave children in a car for extended periods during a heat wave,” he said.“That’s a big problem. Luckily, the children this weekend were treated before any severe issues happened, but parents must remember that even just 10 minutes inside a hot car for an infant can be deadly.”Poch said United Hatzalah’s chief paramedic sent out an email Monday morning warning of the signs of dehydration, which include drowsiness, vision impairment (such as seeing black spots), accelerated pulse rate, and in the advanced stages, nausea and vomiting.“With mild dehydration, someone can lose up to 5% of their body weight from sweat and evaporation, and in advanced stages, people can lose 10% or more, which is approximately seven liters,” he said.First-responders, Poch noted, are advised to first intravenously inject those suffering from dehydration with fluids into their veins.“Every responder has at least three liters of intravenous fluid, and usually more on hand for emergencies,” he said.While staying outside for the entire day is not advisable, Poch said those who do so must bring water with them, adding that taking lukewarm showers instead of cold ones when dehydrated is also advised to avoid hypothermia.“Because a person has lost a lot of liquid, they get colder faster, so surprisingly hypothermia and dehydration can be connected,” said Poch. “Lukewarm is the way to go.”Ultimately, Poch said people should avoid protracted periods in the sun, but to wear hats and carry water at all times if forced to be outside.In terms of pets, he advised dog owners to always bring water to drink during walks, and avoid peak sun hours, during which the pavement can burn their paws.“The thing with pets is that you want to avoid taking them out during the day because the asphalt and even grass can get so hot that it can burn their paws, so walk them in the morning and after the sun has gone down,” he said.“Really,” he concluded, “you just want to drink water to stay safe.”