Resolution states that boycotts and related tactics are a form of economic and political warfare meant to threaten Israel’s sovereignty and security, and are the antithesis of peace, dialogue. 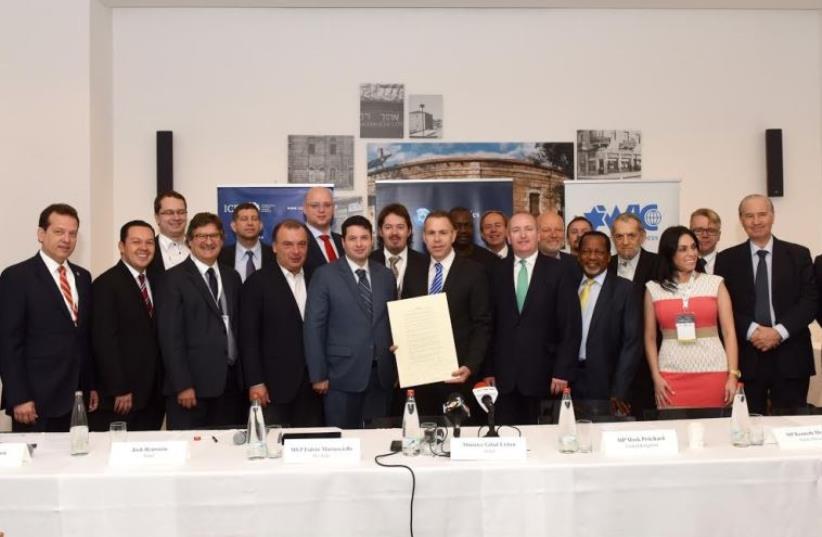 Public Security Minister Gilad Erdan (C) with MPs at the Israel Allies Foundation’s annual Jerusalem Chairman’s Conference
(photo credit: ISRAEL ALLIES FOUNDATION)
Advertisement
Parliamentarians from around the world are calling on their governments to divest from any company that supports boycotts, sanctions and divestment against Israel.The 22 MPs took part in the Israel Allies Foundation’s annual Jerusalem Chairman’s Conference this week, where they drafted the resolution to “unequivocally declare our support for the Jewish people to live in peace, safety and security in the Land of Israel, and in their undivided capital, Jerusalem… [and] recognize the unique, historic and spiritual significance of the Land of Israel and the City of Jerusalem to the Jewish People.”The resolution, presented to Public Security Minister Gilad Erdan, who also holds the anti-BDS portfolio, on Thursday, states that boycotts and related tactics are a form of economic and political warfare meant to threaten Israel’s sovereignty and security, and are the antithesis of peace, dialogue and reconciliation.“The State of Israel is the most prominent target of [BDS] activity,” the resolution reads. “The delegitimization and double standards applied to Israel, the nation-state of the Jewish people, are immoral, unjust and reminiscent of anti-Semitic rhetoric applied to the Jewish people in the past.”The resolution acknowledged that many countries’ public policy is to oppose boycotts against Israel or those generally based on national origin, and that they cooperate with Israel to benefit their companies and improve economic competitiveness.The MPs wrote that companies that refuse to deal with Israel have questionable ethics and commercial soundness, and that government contracts with them oppose World Trade Organization rules and international trade laws.“We call on our respective governments to further promote economic cooperation with Israel and reinforce policies examining a company’s promotion or compliance with unsanctioned boycotts, divestment from or sanctions against Israel as part of its consideration in awarding grants and contracts.We, furthermore, seek the divestment of our governments’ state assets from companies that support or promote actions to boycott, divest from or sanction Israel,” the resolution states.Erdan accepted the resolution from the lawmakers who hail from the UK, Italy, Slovakia, the Netherlands, Greece, Hungary, Czech Republic, Greece, Finland, Canada, South Africa, Uganda, Guatemala, Uruguay, Dominican Republic, Brazil, Chile and Paraguay.The minister praised the resolution, saying, “I couldn’t have written it better,” adding that the MPs “realize that the BDS movement does not aim to bring peace, but rather the destruction of the State of Israel as the national homeland of the Jewish people and we are united against it.”Erdan also came out against the labeling of settlement products, as supported by the European Parliament last month, saying the policy “would make history’s greatest anti-Semites proud.”South African MP Kenneth Meshoe encouraged his European colleagues to fight labeling.“We demonstrated on the streets of South Africa and legislators changed their minds,” Meshoe recounted.MEP Fulvio Martusciello of Italy called labeling criminal discrimination.“I am working on a resolution against labeling in the European Parliament, particularly in the European People’s Party, which will surely pass in parliament, because we want peace,” he said.According to British MP Mark Pritchard, “The proposal to label products from Judea and Samaria is against WTO rules, and we have committed to battle such discriminatory practices in our respective parliaments.”Israel Allies Foundation Executive Director Willem Griffioen said legislators at every level have reached out to work against BDS with the NGO, which partners with parliamentarians around the world to mobilize support for Israel based on Judeo-Christian values.“The Israel Allies Foundation is pleased to announce a major anti-BDS legislative initiative to help state and national governments regulate their commercial and investment activity, protecting their public policy and bilateral trade from national origin discrimination,” Griffioen said. “We will help them boycott the boycotters.”