Muslim and Jewish extremists barred from Old City during Passover

The police order will be in effect until the conclusion of the holiday. 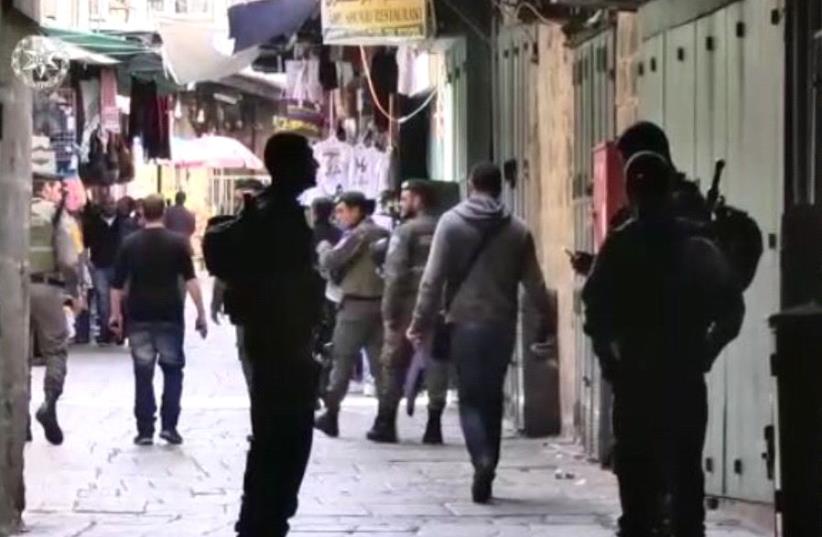 Border Police officers in Jerusalem's Old City
(photo credit: COURTESY ISRAEL POLICE)
Advertisement
After receiving intelligence of plans to create disruptions and potential violence in Jerusalem’s Old City during Passover, police have banned some 10 Muslim and Jewish extremists from entering the area until the holiday is over.According to police spokesman Micky Rosenfeld, the Muslim suspects intended to harass Jewish visitors to the Temple Mount, while the Jewish extremists intended to hold protests near the Western Wall.“Police operations took place to gather information on individuals who are intending to cause disruptions during the Jewish festival,” Rosenfeld said on Thursday. “The majority of the suspects are Israeli-Arab extremists who planned to cause disturbances on the Temple Mount. At the same time, we issued a number of retraining orders against Jews who intended on coming to the Western Wall area to create disturbances.”
Israelis prepare for Passover 2017 in Jerusalem (REUTERS)
Rosenfeld said police operations began on Friday and will continue until the holiday’s conclusion.Over 3,500 police officers will patrol Jerusalem during Passover and Easter, with an emphasis on the Old City, where some 150,000 visitors from around the globe are expected to gather at the Western Wall and in the Christian Quarter.Rosenfeld said some 1,500 extra officers from various units will be on hand for the duration of both holidays.For the Priestly Blessing at the Western Wall on the morning of April 13, Rosenfeld said more than 100,000 Jews are expected.For the Holy Fire ceremony at the Church of the Holy Sepulchre in the Christian Quarter on April 15, more than 50,000 Christians are expected, according to Rosenfeld.“Police will ensure the security and ease of travel for the tens of thousands of visitors entering and exiting the Old City,” he said, noting that there will be close coordination with multiple churches and synagogues.

Tags easter in jerusalem
Advertisement
Subscribe for our daily newsletter