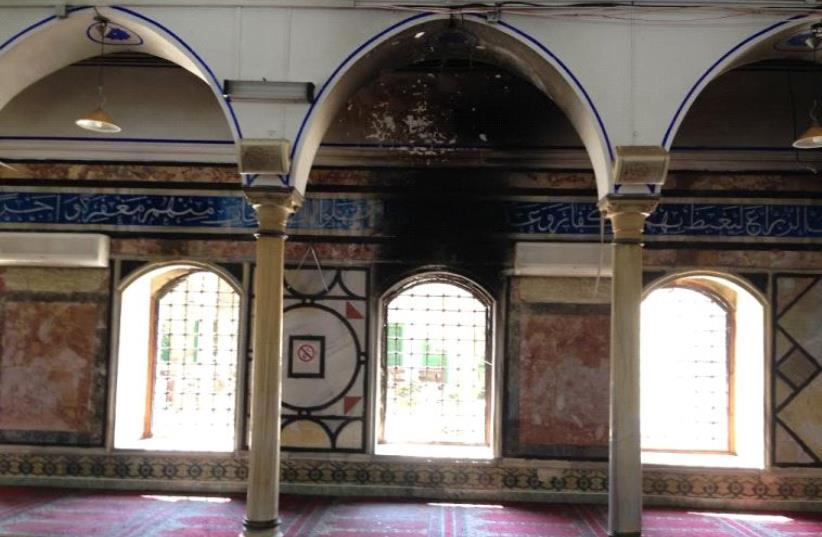 The Al-Jazzar mosque after the fire
(photo credit: ELIYAHU KAMISHER)
Advertisement
As Acre city workers cleaned up the burnt remnants littering al-Jazzar mosque and the adjacent courtyard Monday with the hope of readying it for afternoon prayers following a fire the previous night, an initial police investigation indicated that the cause appeared to be an electrical short circuit, not a motivated attack.The fire at Israel’s second- largest mosque after Jerusalem’s al-Aksa and a UNESCO world heritage sight, damaged the external women’s prayer section causing the structure to collapse and tiles to break apart. A majority of the mosque escaped unscathed.Ibrahim Masri, the muezzin of al-Jazzar, was one of the first on the scene after some residents of Acre’s Old City alerted him to the blaze.“The fire happened at around 9:30 p.m. after the last prayer, I had locked the main door and turned off all the air conditioners. I was supposed to return at 4 a.m.for morning prayers but suddenly someone called me and said the mosque was on fire,” he said.Asked what his immediate thoughts were regarding the cause of the fire Masri said: “I just thought about putting the fire out, no immediate thoughts, but I did not think it was caused by Jews.”Most residents of Acre, Muslim and Jewish, seem to agree, and the hundreds of residents who joined the Acre fire department to help stop the fire as quickly as possible highlight the city’s relatively high level of trust and interfaith cooperation.“Attacks like that don’t happen in Acre,” said Sharbe, a waiter at the Abu Elias restaurant, who declined to state his last name. “Muslims and Jews work together here.”Acre, one of Israel’s few mixed Arab-Jewish cities, has around 60,000 residents with Israeli-Arabs making up about one-third of the population.The working-class city on Israel’s northern coast has had its fair share of tensions, however. In 2008, Jews and Arabs rioted on Yom Kippur after an Arab motorist entered a mostly Jewish neighborhood loudly playing music on Judaism’s holiest day.Tensions also have built in the walled Old City, which is overwhelmingly Arab populated, as Jewish residents attempt to buy property there; throughout the Old City signs reading “not for sale” hang from a few windows.Relations largely appear to have recovered, however.According to Salim Nagarim, who works for the Acre Islamic Waqf (the caretaker of al-Jazzar) Jews and Arabs have grown from past tensions.“We learned from past clashes, we respect each other and we try to find the best way to live together,” he said.In a statement to The Jerusalem Post, the Acre mayor’s spokesman’s office said Arab-Jewish relations have reached levels of intimate cooperation.“Relations are extremely good here, we have many programs that promote dialogue, including a Jewish and Arab parliament that meets periodically, youth groups and youth activities,” the statement read.The day after the fire struck al-Jazzar mosque, Muslim residents of the Old City had no complaints about the response of city services as the municipality has taken an active part in cleaning the mosque, while police are conducting an investigation, and the fire department responded in time to prevent major damage.“The police and fire department did their job, everything was fine and there was no negligence at all,” Masri said.And so, day-to-day life and friendships continue for the Jewish and Muslim residents of Acre who pay little attention to their religious differences, such as Yisrael, who told the Post he interacts daily with his Muslim neighbors.“One of my friends said he would only go on a pilgrimage to Mecca if I come, too,” he said, half joking.