The source of the billboard is still unclear, though some speculate it could be tied to an upcoming art exhibit in Jerusalem. 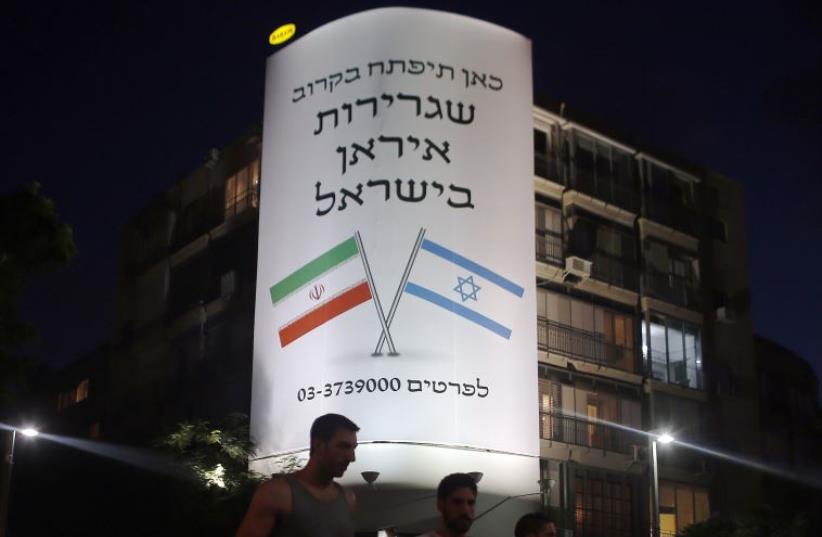 Could this be the start of a beautiful Jewish-Iranian friendship?
(photo credit: AHMAD GHARABLI / AFP)
Advertisement
A mysterious billboard proclaiming the opening of an Iranian embassy in Tel Aviv drew global attention on Tuesday after a photo of the billboard went viral on Facebook and other social media channels.The billboard, hung outside of the Tel Aviv municipality building, was originally posted Sunday on the Israel Loves Iran Facebook page.The caption above the photo reads "Tel Aviv today. [T]he poster says: The Israel/Iran Embassy will soon open here. No Photoshop."Commentators on the Israel Loves Iran photo took to the forum to speculate the meaning behind the curious sign. Some suggest that the billboard is an art installation, indicating desire by the Israeli public to reignite relations with Iran. Other commenters hypothesize that the billboard is a satirical message in response to support given by foreign bodies towards the nuclear deal with Iran, and should not be taken literally.Ryan Amir Lahuti, a commentator originally from Tehran, offered an alternative explanation as to who may have funded the billboard. "I had heard about this. This is not a Photoshop. This is being done by some Israeli-Iranians living in Tel Aviv.""My hat is off to them [Israel] to rise above politics," he wrote. Most Israelis and Iranians who commented on the photo seemed optimistic of increased positive relations between the two nations.Rashin Mahdavi, a student from Iran, expressed her support of Israeli-Iranian relations, and criticized the Iranian government's stance towards Israel."Unlike the Iranian government's hatred toward Israel, the Iranian people have great sympathies with Israelis. Me, as an Iranian, would love to see two great nations both with cultural and historical ties be friends as they used to be. I hope so."The number on the banner leads callers to the "Iranian embassy in Tel Aviv" and instructs callers to leave a voicemail. Some Israeli websites suggested that the billboard was created in association with the Hamabul art group, who posted a photo on their Facebook page calling for the opening of an Iranian embassy in Jerusalem.In their Facebook photo, posted on August 13, Hamabul calls on Israeli artists "from the fields of photography sculpture, video, drawing, installation, performance and movement to explore and express personal artistic perspectives of Iran as a society, a people, a culture, a history, a geographical region or another perspective." The works of art, in cooperation with the Jerusalem Foundation and the Jerusalem municipality, would be displayed in the newly minted "Iranian embassy in Israel.""Our desire is to create an embassy of cultural voices without borders or hidden agendas that establishes a connection between the Iranian and Persian people and those of Israel and the West," their photo stated. Although the Hamabul art group claims responsibility for the creation of the "Iranian embassy in Israel" art exhibition, the origins of the mysterious billboard still remain unknown."We don't take responsibility for this [billboard], but we are extremely happy with it," Hamabul stated in a reaction to the photo on their Facebook page.