Mystery of Acre Tower Shipwreck closer to being solved 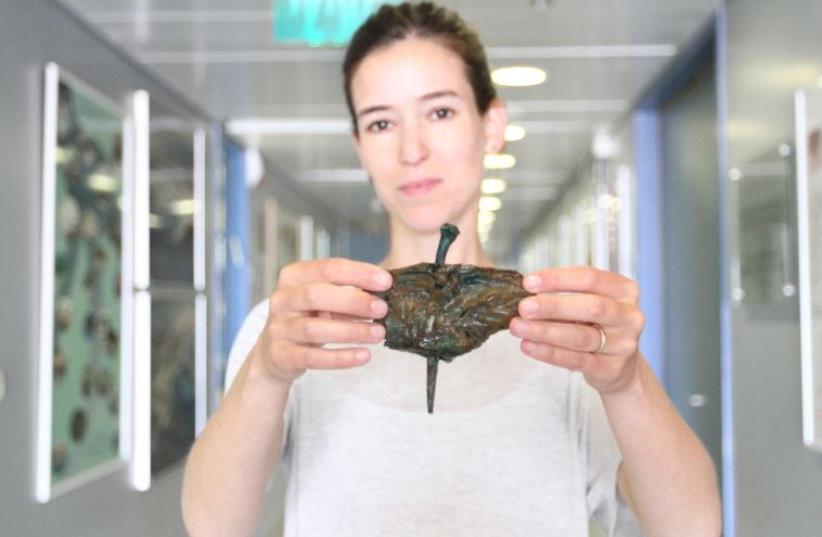 A nail from the shipwreck.
(photo credit: UNIVERSITY OF HAIFA)
Advertisement
The so-called Acre tower shipwreck has mystified Israeli researchers for more than 50 years. Discovered in 1966, during the first maritime archeological survey conducted in the country using remote sensing technology, the shipwreck was identified off Israel’s coast.To date, researchers have been unable to agree on its identity, and as time passed, the mystery only seemed to become more opaque.It was discovered by the late Dr. Elisha Linder, a pioneer of maritime archeology in Israel and founder of the Recanati Institute for Maritime Studies at the University of Haifa, which worked with a British team.The researchers hypothesized that the ship was sunk at the entrance to the port of Acre by the British during their attempt to prevent entry by the navy of Napoleon Bonaparte in 1799. A map found in a British archive, which allegedly belonged to one of the British soldiers who participated in the battle, indicated that the British had indeed sunk a ship at the location, and convinced the researchers that their hypothesis was correct.However, as the years passed, new details emerged, shedding doubt. For instance, Bonaparte arrived in Acre via land.Therefore, there would have been no need to sink the ship.Moreover, further exploration of the shipwreck revealed that the vessel was smaller than had originally been believed – 25 meters rather than 45 – and was in all probability a merchant ship.Still, throughout this period the researchers had no firm scientific evidence supporting any particular hypothesis.That changed following a recent study undertaken by a student under the supervision of a consortium of professors, including Dr. Deborah Cvikel and Yaacov Kahanov of the University of Haifa, Dr. Dana Ashkenazi of Tel Aviv University, Prof. Adin Stern of Ben-Gurion University and Dr. Sabina Klein of Frankfurt University.During the study, the first scientific evidence from the shipwreck was uncovered.More than 100 brass nails were found inside, mostly embedded in the wooden hull, and others were scattered inside the vessel.Two different types of nails were found, with lengths of approximately 10 centimeters and 6.5 centimeters, respectively.Both types of nails underwent a series of tests, including measurements of the density of the brass; fluorescent spectroscopic examinations using X-rays examining their chemical composition; optical inspection using a light microscope and a scanning electron microscope to determine the quality of the metal casting and the micro-structure and structure of various parts of the nails; examination of the rigidity of the material; and lead isotope analysis.During the final examination, the researchers took two brass nails from the ship and two modern steel nails, and then hammered them to examine how each nail penetrated different pieces of wood.This last test revealed numerous details, including that the micro-structure of the nails and presence of silicon proved that they had been manufactured using the sand-casting method.The researchers also found a high proportion of zinc and other substances in the alloy.The composition and rigidity of the nails illuminated the manufacturing process, while the isotope analysis identified the most probable location where they were made.Drawing together all their findings, the researchers formed the following conclusion: The nails were probably manufactured at a European foundry, using raw materials from Britain.“In light of the research findings, we now believe that this is a European merchant vessel that sunk off the coasts of Acre at some time during the first half of the 19th century,” the researchers wrote.The findings were published in the journal Metallography, Microstructure, and Analysis, and the International Metallurgical Society awarded the authors its prestigious Buehler Prize for the best metallurgical study published in 2015.