Nahal recon battalion braces to engage enemies above and below ground

The IDF has refocused on the goal of training ground forces, in line with a directive issued by Chief of Staff Lt.- Gen. Gadi Eisenkot. 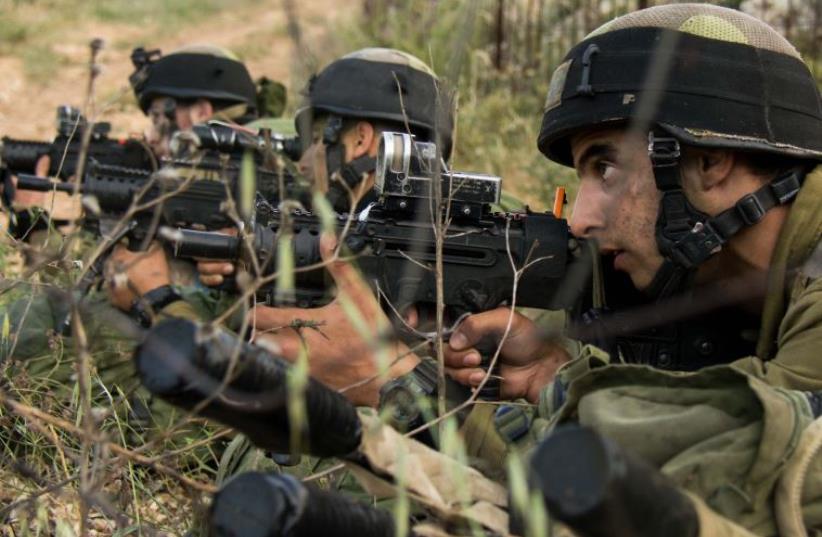 Soldiers with the IDF's Nahal reconnaissance battalion participate in drills
(photo credit: IDF)
Advertisement
The elite Nahal reconnaissance battalion, which specializes in commando raids on enemy targets, has in recent days held a week-long war drill in the northern Jordan Valley.The drill is part of an extensive training period, designed to prepare the unit for combat with Hamas in Gaza, and Hezbollah in Lebanon and Syria.Maj. Gidi Eliastam, deputy battalion commander, told The Jerusalem Post on Wednesday that the drill involved teams and companies, and the whole battalion would soon particiapte in a war simulation.A brigade-level war drill is in the works too.The latest exercises are just one part of a 14-week training period, the biggest since the battalion took part in Operation Protective Edge against Hamas in Gaza last summer.The IDF has refocused on the goal of training ground forces, in line with a directive issued by Chief of Staff Lt.- Gen. Gadi Eisenkot.Looking at the simulated battle scenarios, Eliastam said that in many ways Hamas and Hezbollah are very similar.Both are “semi-military enemies, both base their fighting techniques on studying us. The Hezbollah we encountered in the Second Lebanon War of 2006 is very similar to the Hamas we engaged in 2014. We need high intensity strikes, and maneuvering in territory for many kilometers, carrying heavy loads. Our order of battle must be to enter deep into enemy territory,” he said.The Nahal reconnaissance battalion has spent many months carrying out operational security missions, first on the Gaza border and then on the northern borders, and finally in the northern West Bank. Now, Eliastam said, the time has come to train.“We need to maintain combat effectiveness,” he said.“We had a lengthy period in which we did not hold battalion- level and brigade-level exercises. We are carrying out a significant exercise to prepare for operational scenarios in every sector, southern or northern,” the officer added.He described intense physical and mental training to prepare soldiers for warfare in any of a potential number of arenas on Israel’s borders.Eliastam said the drill covered more than one type of topography and simulated “different enemies that have to be studied. We practiced moving against them and striking them.”The reconnaissance battalion trained with armored, engineering, and air force units, representing a combination of forces that has become integral to the IDF’s latest concept of integrated battle techniques.Unlike the eight-months of basic and advanced training other infantry soldiers undergo, Nahal reconnaissance battalion members take a 16-month training course to acquire the higher physical and mental capabilities needed for elite missions. The battalion can fulfill a range of defensive maneuvers as well, to protect borders and populated areas.“When we fought in Gaza, we were not surprised by the enemy,” Eliastam said. “We knew where we were going, and that we had come to deal with tunnels, which did not surprise us. Today, we are preparing our forces to know the enemy in a more significant way. We can deal with scenarios and missions, or specific incidents, whether they occur above ground or below it.“We are studying an enemy that hides, and we are learning, just as it learns about us, too. Our goal is to ensure that our forces know how to function in battle and strike,” the deputy commander added.“We define ourselves in terms of the level of readiness that soldiers and commanders will have after this training,” Eliastam said. “I think we will see things differently after this lengthy period of maneuvers.”