Ayelet Shaked has hinted that changes had been made to the judges’ preparation course following criticism that liberal judges were vetting out conservative candidates. 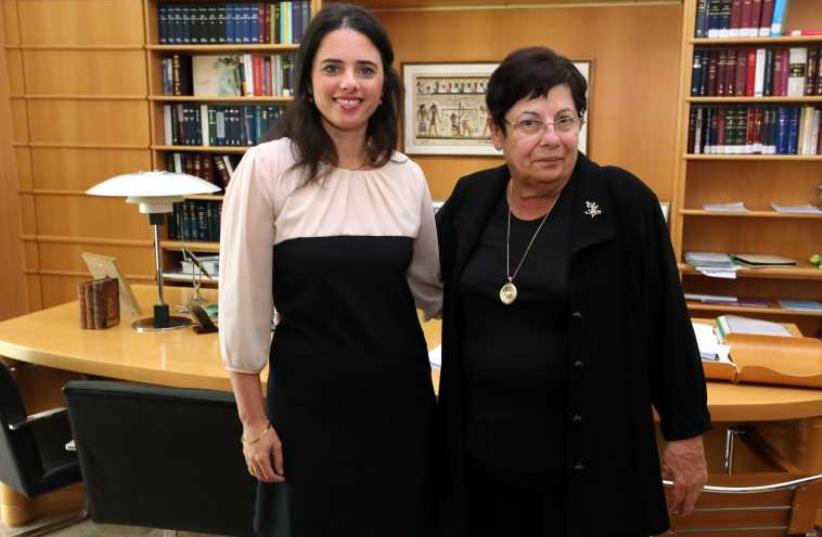 President of the Israeli Supreme Court, Judge Miriam Naor, meets with Justice Minister Ayelet Shaked.
(photo credit: REUTERS)
Advertisement
Supreme Court President Miriam Naor has agreed to permit two Bar Association lawyers to be involved in a seminar that is the main tool used for selecting judges to promote up the judicial chain.The court spokeswoman announced the development on Sunday, although Naor sent a letter to Bar Association President Efi Naveh on Thursday notifying him of her terms for agreeing to the initiative that he had requested.In August, Justice Minister Ayelet Shaked hinted that changes had been made to the judges’ preparation course following criticism that the seminar was being abused by liberal judges to vet out conservative colleagues.Shaked had said at that time that the Israel Bar Association was cooperating with the courts on the issue, and that looking into the issue would hopefully lead to the appointment of more ideologically diverse judges. However, she never clarified exactly what changes had been made.In fact, in a speech by Naor at the same conference, it appeared that no changes had been made and that she flatly rejected all charges of improper vetting.Sunday’s announcement clarified that the debating sides have come to a compromise pilot program involving two Bar Association lawyers in the next seminar.Naor’s letter to Naveh listed a number of conditions for the lawyers’ participation, including attending pre-seminar meetings, committing to secrecy regarding deliberations about judicial candidates and certain limits on their participation.After this next seminar at which the pilot program will commence, Naor, Naveh and Shaked will consult again about the future of the pilot program.In her August speech, Shaked had called the course a unique phenomenon worldwide and stated that it must give equal chances to those lawyers coming to the judicial branch from the “public and private sectors.”She added that in light of the recent criticism, judges must “regain the public’s confidence on the issue.”In contrast, Naor rejected the criticism and said that no changes have been made to the judicial selection process since it was amended in 2007.She explained that the purpose of the preparatory course was to address criticism that originated a decade ago, stating that many magistrate-level judges were getting passed over for promotion to a district court simply because the Supreme Court president did not know them sufficiently well.The current cooperation between Naveh and Naor greatly contrasts with the ongoing war between their predecessors Doron Barzilai and Asher D. Grunis, who feuded over Barzilai’s survey of lawyers to rate judges.