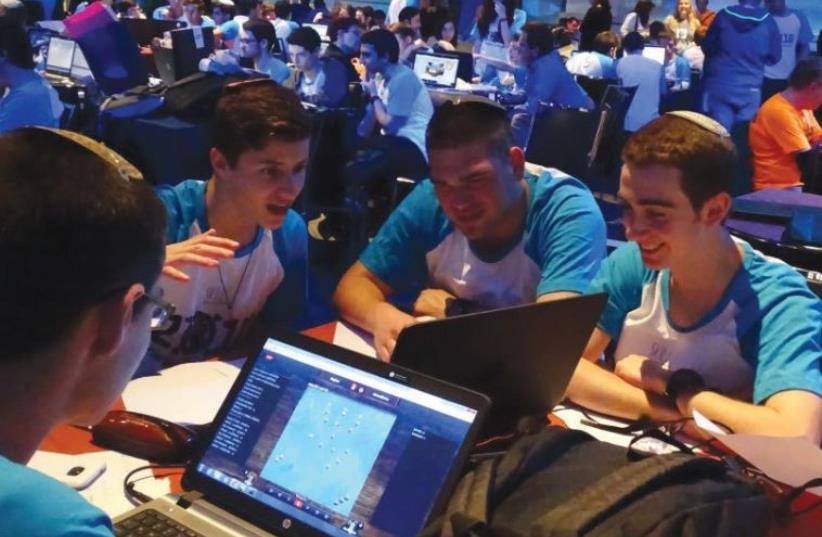 HIGH SCHOOL pupils compete in the finals of the National Cyber Conference in Tel Aviv, April 12, 2016
(photo credit: (AICF/CHRIS LEE))
Advertisement
Pupils from the Ostrovsky High School in Ra’anana received first place out of some 200 schools nationwide who gathered in the Tel Aviv Port for the final round of the National Cyber Competition on Tuesday.“The cyber champions will lead the future of Israeli hi-tech,” Education Minister Naftali Bennett said.The cyber competition was jointly launched by the Education Ministry, the Rashi Foundation, and Israel Advanced Technology Industries, an umbrella organization representing the hi-tech and life science industries.The purpose of the competition is to introduce and to encourage pupils to study mathematics, computer science and technology.“Programming is a language and in order to excel students must learn the language from a young age,” he added.The competition began in October and initially included some 1,900 schools and pupils from third to 12th grades, who competed in separate age groups, and received instruction and close guidance on the basics of cyber tech, programming and computer science.The top pupils from each school were selected and divided into groups of five to compete in the national competition.Prior to the championship, the participants underwent additional training and studied numerous techniques of programming.“The championship was designed to open a window for pupils onto the world of technology and science, and through games and interactivity to encourage challenges, creativity and thinking outside of the box,” said Bennett.According to a recent Central Bureau of Statistics report, the percentage of students eligible for higher level mathematics as well as science matriculation certificates is in decline.According to the findings, there was a drop in students eligible for the fifth unit – the highest level – mathematics matriculation exam from 19.2 percent in 2009/10 to 17.7 percent in 2013/14; and a drop from 31.7% in 2009/10 to 24% in 2013/14 of students eligible for the fourth unit mathematics matriculation exam.In addition, the report found that the percentage of students eligible for both higher level mathematics matriculation certificates as well as an additional matriculation certificate in at least one other science and technology field was also in decline – from 17.1% in 2009/10 to 15.8% in 2013/14.Bennett has made this a top priority and introduced reforms to encourage students to pursue mathematics as well as scientific and technological fields in institutions of higher learning.Last year he announced that high school students who have completed five units of mathematics will be awarded an advantaged status when applying to universities.