Ya’alon threatens to ‘tell all’ on controversial German submarine deal 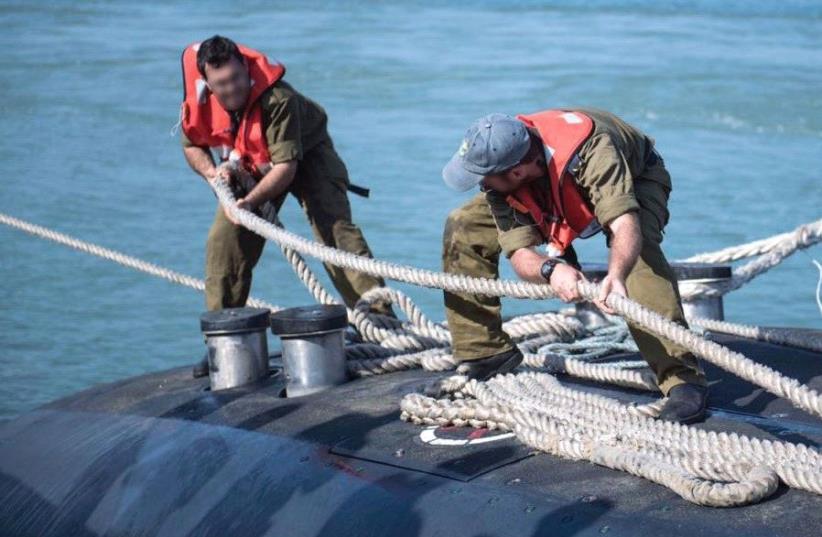 THE DRILL, which began last Saturday night and ended Thursday, examined the capabilities of the submarines operating deep in enemy territory as part of a combined force of naval vessels.
(photo credit: IDF)
Advertisement
The Israel Navy’s submarine fleet was put to the test in a surprise six-day drill simulating the outbreak of war, aimed at examining the level of operational readiness of submarines and fighters.The drill, which began last Saturday night and ended Thursday, examined the capabilities of the submarines operating deep in enemy territory as part of a combined force of naval vessels working to achieve an objective together, the army said.The exercise saw the navy’s submarines work alongside the elite Shayetet 13 naval commando unit, the gunship flotilla, a squadron of patrol boats and Israel Air Force craft.“During the exercise, an emphasis was put on the central aspects of the submarine flotillas in an emergency, including collecting intelligence, working together with other units in the navy and air force, as well as anti-submarine warfare,” the IDF said.The drill was a “pinnacle in the process of developing” the submarine fleet into a more “significant force in the navy and the IDF in general,” the statement continued.Israel has three Dolphin-class submarines and two Dolphin 2-class submarines (another one is expected to be delivered in 2018). The subs are said to have a shelf-life of around 30 years, making them obsolete in another 10 years.A deal to purchase three Dolphin 2-class submarines from Germany is currently under police investigation, known as Case 3000 or “the submarine case.” Police are looking into allegations of corruption relating to a 2014 deal with the German company ThyssenKrupp to sell the Israeli navy advanced submarines.While authorities have stressed that Prime Minister Benjamin Netanyahu is not a suspect in the criminal investigation, former defense minister and IDF chief of staff Moshe Ya’alon, who initially succeeded in stopping the planned purchase, threatened to “go public and tell everything” last week if the investigation into the allegations don’t produce an indictment.Speaking on Hot’s Lior Dayan is Connected show, Ya’alon said he is sure that Netanyahu and his personal lawyer (and cousin) David Shimron are involved in the case.Shimron also represented Michael Ganor, ThyssenKrupp’s representative in Israel.After Ya’alon stepped down as defense minister, Netanyahu renewed the negotiations with Berlin.According to the former minister, while he knew about other corrupt prime ministers, “it’s a completely different thing when a prime minister shifts priorities, prefers this or that motive, perhaps even monetary gain, over the interest of the State of Israel.“We are talking about a deal worth billions that neither I, as minister of defense, nor the army chief of staff nor the commander of the navy requested. These billions do not meet security needs and, as far as I’m concerned, they could [meet the needs] of people with disabilities who are protesting now, of the problems in hospitals and emergency rooms, of the poverty existing in Israel,” he said.The Israel-bound subs in question are said to have 16 multipurpose torpedo tubes that can fire torpedoes and even swimmer delivery systems.According to foreign reports, these submarines provide Israel with nuclear second-strike capabilities, carrying long-range cruise missiles with nuclear warheads. They would not reach Israel for another decade but are expected to replace the older Dolphins at a cost of combined price of NIS 5 billion.