29-year-old released less than a week after she was indicted on charges of carrying a knife and making threats. 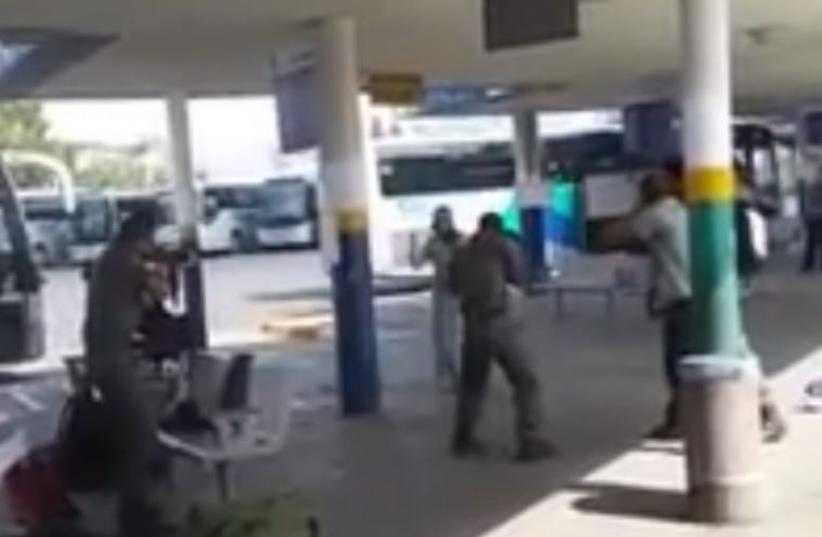 Police aim their weapons at a Palestinian woman armed with a knife at the Afula bus station
(photo credit: Courtesy)
Advertisement
Asra Abed, a 29-year-old divorced mother who faked a stabbing attack in a failed suicide attempt last month, was ordered on Wednesday to be released to house arrest, less than a week after she was indicted on charges of carrying a knife and making threats.Abed will be released on Thursday into the custodianship of seven family members in Nazareth, unless the decision is appealed.At the Nazareth Magistrate Court on Wednesday, a series of Abed’s relatives, including her father, brother, brother-inlaw, sister and three aunts, were tasked with watching her at her parents’ house. They will have around-the-clock responsibility for supervising her, to keep her from hurting or killing herself, or fleeing the house.Women relatives were included in the list of those responsible for Abed until trial, as she requires supervision while showering and changing clothing, in order to ensure that she does not harm herself and does not have a weapon. They were also ordered to search her and her bed before she goes to sleep, to ensure she is not armed.Family members described Abed as a young woman plagued by emotional and mental issues, noting that she has been hospitalized in mental institutions on a number of occasions and has repeatedly attempted to take her own life over the past two years. In addition to the faked attack at the Afula Central Bus Station last month, these attempts have included swallowing pills, drinking motor oil, trying to drown in the sea, and – on at least two occasions – trying to jump to her death.Abed’s sister Fatma, one of the custodians placed in charge of her house arrest, said that “all of the attempts were just to get attention, it wasn’t dangerous.”Prosecutor Nurit Hadas disputed the claim that the attempts weren’t dangerous – at least to Abed herself, if not also to the public – and added that since May she has not received any regular psychiatric treatment and that “with all due respect to the chaperons who spoke here, they do not have the tools or ability to deal with this situation.”In her ruling, Judge Lili Jung-Goffer said Abed exploited the current security situation “in order to fake a stabbing attack in a public place, with the hope that security forces would shoot her dead and thus complete her goal of committing suicide.”Jung-Goffer said the defendant is someone who poses a threat to society in that “while trying to achieve her goal of ending her life, she put the public in great danger, and only through a miracle was she not killed and no one else injured.”That said, she appeared to be sympathetic to Abed’s condition, saying, “Fate has been cruel to her the past two years, and the pain that has followed her has made her life insufferable, to where she decided she was better off dead.”After a psychiatric exam showed Abed suffers from personality disorders and displays signs of schizophrenia, Jung-Goffer ruled that though Abed poses a threat to society, considering her mental state, forcing her to remain in jail throughout her trial could worsen her emotional distress and could cause her to attempt suicide again.The indictment issued against Abed last Wednesday said that she came to the Afula Central Bus Station at 1 p.m. on October 9 and “posed as someone committing a stabbing attack with the goal that security personnel would shoot and kill her.”After arriving at the station, she stood next to a group of civilians and soldiers, and then raised the knife and shouted at the soldiers, “You are terrorists,” but did not stab anyone.She was surrounded by security personnel and was shot several times in the lower body after refusing to drop her knife.