“It appears that a growing number of people in the Israeli public feel that the Western Wall has been ‘stolen’ from them.” 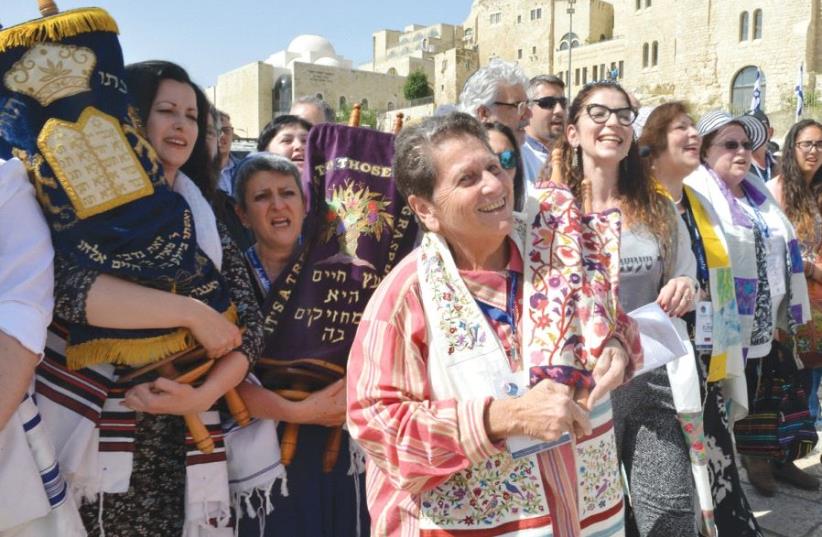 MEMBERS OF THE World Union for Progressive Judaism pray in the Western Wall plaza
(photo credit: YEHUDIT HOFMAN)
Advertisement
A poll has found that almost two-thirds of Israelis believe that Jews of all types should have equal rights to pray at the Western Wall.The poll, conducted for the Schechter Institute of Jewish Studies by the Geocartography Institute, was based on a sample of 500 people with a margin of error of 4.4%.Participants were asked, “Should everyone be allowed to pray at the Western Wall in an equal manner?” to which 62% of respondents said yes; 17% of respondents said that a solution allowing everyone to pray at the site but with priority for Orthodox and traditional prayer services should be implemented; 6.1% said non-Orthodox services should be given precedent; and 9% of respondents said non-Orthodox services and those of the Women of the Wall group should be banned.The poll comes against the ongoing stalemate regarding prayer arrangements for progressive Jewish groups at the Western Wall.The findings of this survey will be presented at the annual Jerusalem conference of the Schechter Institute's Department of Land of Israel Studies in cooperation with The Research Institute for the History of KKL-JNF. The conference will take place on June 6 and is open to the general public. A government resolution approved last year to create a state-recognized egalitarian prayer area at the southern end of the Western Wall has been frozen due to the fierce opposition of the haredi (ultra-Orthodox) political parties and elements in Bayit Yehudi.A poll conducted for The Jerusalem Post by the Rafi Smith Institute in September of last year found that 61% of the general public are in favor of the egalitarian prayer site, an almost identical figure to that found by the Schechter poll.The survey was conducted in anticipation of the 50th anniversary of the Six Day War, which marked the beginning of Israeli sovereignty over the Western Wall and the Old City of Jerusalem.“It appears that a growing number of people in the Israeli public feel that the Western Wall has been ‘stolen’ from them,” said Prof. Doron Bar, president of the Schechter Institute and a historical geographer specializing in the history of sacred sites and the Western Wall since 1967.“Instead of being a popular religious and national site, it has been transformed into a place controlled by a very narrow segment of the population, who force upon the public a very constrained type of visit,” he continued.Bar believes that this reality has distanced Israelis from the Western Wall, which he said is distinct from the first few decades following the Six Day War, during which he said the site was a magnet for many Israelis.The Schechter Institute poll also measured the kind of site Israelis perceive the Western Wall to be.Of those polled, 37% believe that it is both a religious and national site, 30% believe that it is actually a historical site, 26% believe that it is only a religious site and 4.4% believe that it is only a national site.Bar noted that since Israel first took control of the site after the Six Day War, its nature has been under dispute.“The Kotel’s religious importance was always clearly evident. Yet, starting in 1967, Israelis began to view the Kotel as also having value as a historical, public and national site,” the professor said.“From then up until the present time, large segments of the Israeli public continue to believe that these values should be taken into account in developing and maintaining the site,” he added.