Suspect allegedly wanted to beat the Palestinian attacker with the plank but was stopped by police. 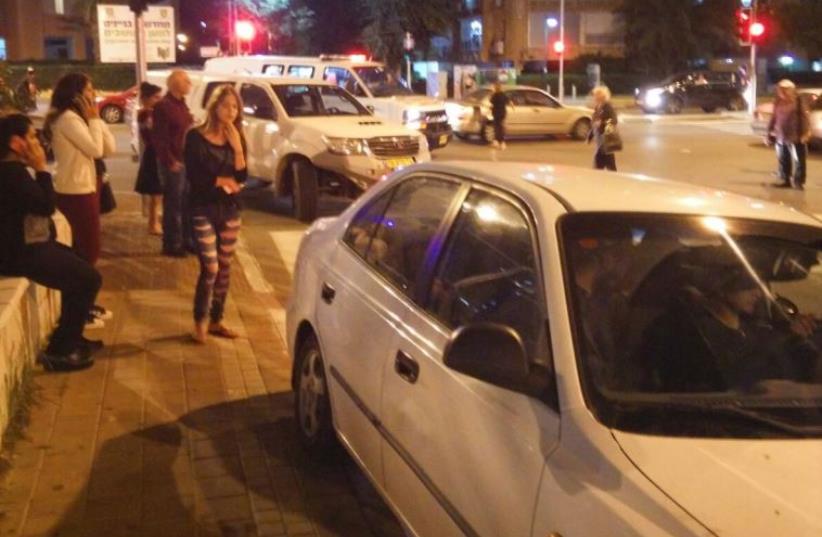 Scene of stabbing attack in Netanya
(photo credit: SHULY A)
Advertisement
A Netanya man who allegedly tried to beat a subdued terrorist in the city Monday night was ordered held in custody Tuesday morning on suspicion of assaulting a police officer and causing a public disturbance.The incident took place minutes after a Palestinian man from a village outside of Tulkarm stabbed an elderly woman and was shot and subdued by police. As the police officers tried to extract the man from the scene, a crowd of dozens of locals swarmed the car, with many trying to reach the terrorist to attack him.
Scene of stabbing attack in Netanya
Police managed to extract the attacker safely, but not before the Netanya man charged to the scene with a wooden plank. The suspect allegedly wanted to beat the Palestinian attacker with the plank but was stopped by police. He then allegedly tried to fight his way through the officers, hitting one of them in the head with the wooden plank.The police officer in question suffered a facial injury and received medical treatment.The suspect was the only member of the crowd arrested during the disturbance.Police said in court Tuesday he was the only one who actually struck a police officer.At the suspect’s remand hearing in the Petah Tikva court Tuesday morning, his attorney Jacky Sagron said his client was “running to go beat up a terrorist. This situation took place just after a man had run around stabbing people.”Sagron also said: “The chief of police has recommended people leave the house carrying weapons,” adding that the danger his client poses is minimal and that “if he’s dangerous, it’s only to terrorists who may be in his area.”In his ruling, Judge Erez Nurieli stated that the suspect has six prior relevant convictions, including for carrying a knife, harassing a witness and drug charges, and has served time in prison.Nurieli ordered him kept in custody for 24 hours as police work on the case.