The new version of the clause is much less specific but has the approval of Attorney-General Avichai Mandelblit. 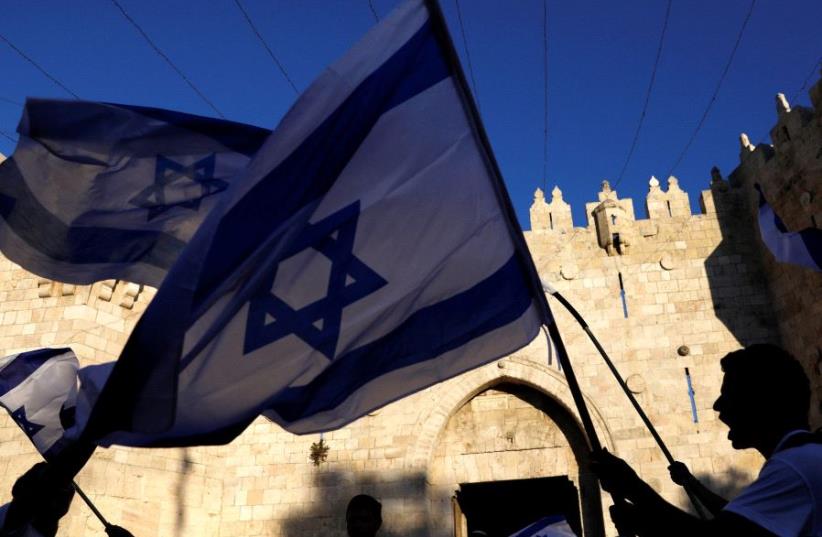 Israeli flags in front of Damascus Gate
(photo credit: REUTERS)
Advertisement
Netanyahu and Bayit Yehudi leader Naftali Bennett reached a compromise Sunday on a controversial clause in the Jewish nation-state bill, making it more likely that the bill will pass into law in the Knesset plenum on Monday night.Before the compromise, the controversial clause would have permitted communities to limit themselves to people of their own religion. It was intended to counteract a Supreme Court decision that barred Jewish communities from prohibiting Arabs but permitted minorities to prohibit Jews.The new version of the clause is much less specific but has the approval of Attorney-General Avichai Mandelblit.“The state sees developing Jewish settlement as a national interest and will take steps to encourage, advance, and implement this interest,” according to the new clause, which will come to a vote on Monday.Meretz leader Tamar Zandberg said the new version of the clause remained racist and divisive and was born in sin.An earlier version, drafted by the Ministerial Liaison to the Knesset and Tourism Minister Yariv Levin, said: “The state will encourage, establish, and strengthen Jewish settlement in a way that will make clear that encouraging Jewish settlement is a legitimate way of implementing the Zionist vision and is not unacceptable, discrimination or inequality.”That draft was immediately rejected by Bayit Yehudi MK Bezalel Smotrich, who told Joint List MK Ahmed Tibi at the start of a committee meeting at the Knesset that Arab MKs had gotten Netanyahu to surrender to them.“Those who do not know how to defend Israel as a Jewish state in a practical way should return their keys and go home,” Smotrich said.“The attempts by Netanyahu and Mandelblit to castrate the bill and empty it of practical content is one surrender too many, after Netanyahu also surrendered on migrant workers and to terrorist attacks of incendiary kites.”Voting on that clause and another controversial clause about the relationship between the state and the Diaspora will take place in the committee on Monday morning.Jewish Federations of North America president Jerry Silverman met with Netanyahu’s associates and politicians on Sunday, in an effort to get the Diaspora clause changed to its original version.The old version of the clause said: “The state will take action to maintain the connection between the state and the Jewish people wherever they are.” The new version replaced “wherever they are” with “in the Diaspora.”United Torah Judaism MKs said they requested the change, because they did not want the state to help Diaspora Jews advance religious pluralism in Israel in general and at the Western Wall in particular.