Netanyahu touts 'building alliances' in light of tensions with Obama

Netanyahu, speaking to a strategic conference near Tel Aviv, blamed the Palestinians for the 14-month impasse in negotiations. 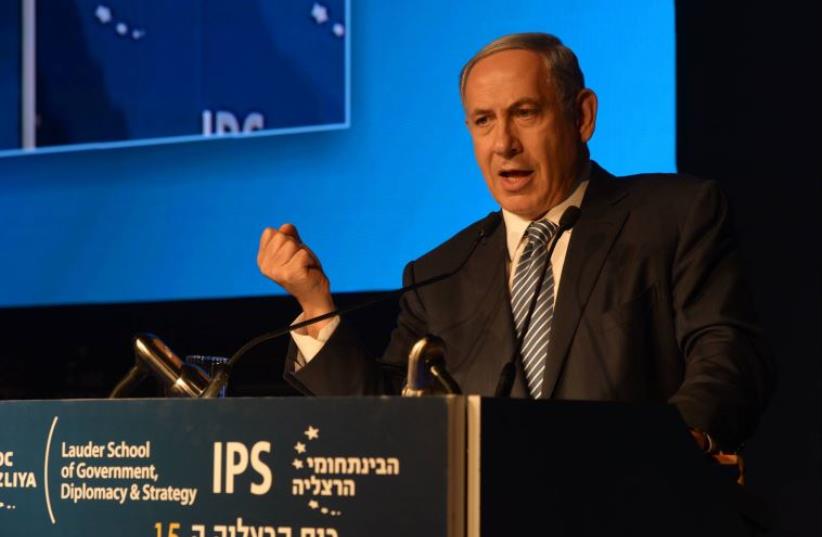 Prime Minister Benjamin Netanyahu delivers remarks at the Herzliya Conference
(photo credit: AMOS BEN GERSHOM, GPO)
Advertisement
Amid continuing tensions with the White House and concern about diplomatic isolation, Prime Minister Benjamin Netanyahu underlined during a speech Tuesday the importance of “bridge building” with countries both near and far.“Build alliances,” he said toward the end of a lengthy, hour-long address at the Herzliya Interdisciplinary Center Conference. “Every state needs alliances.”“Superpowers need alliances,” he continued. “A small state like Israel definitely needs alliances, definitely.”This line was one of only two lines that garnered applause from the audience. The other was when he recommitted himself to a two-state solution.Netanyahu, who said he speaks with “quite a few of our neighbors, more than you think,” said he has received requests from “Arab quarters” to “go out there” and speak out to the Americans about the Iranian nuclear threat.“I said I do tell them,” Netanyahu retold. “It’s not easy either, because we are dealing with our most trusted ally, our indispensable ally. But I feel it is my responsibility as the prime minister of Israel.”“We’re not going to get another chance in history; this is it,” he said, explaining his vocal opposition to the Iran deal. “If I think something threatens our survival, and we have an honest difference of opinion with our trusted American friends, I’m voicing it.”Netanyahu, who at times seemed out of breath during a speech in which he switched intermittently from Hebrew into English, revealed that he phoned US Treasury Secretary Jack Lew after he was booed by some in the audience at the Jerusalem Post Conference in New York on Sunday.“I talked to Jack Lew yesterday.I called him up and said, ‘We are family, we speak respectfully in a family; we can disagree, but we respect each other,” he said. “So with the greatest respect I say to our American friends – and we have no better friends, and America has no better friend than Israel – that if Iran wants to be treated like a normal country, let it act like a normal country.”The prime minister hinted that there was some “bridge building” happening with moderate Sunni countries in the region, but provided no details.“I want to say something about bridge building. It is not always achieved by grand pronouncements,” he said. “In fact, it can often be undermined by them. Bridge building is a delicate process that has been quietly strengthened in the past few years and can be dramatically strengthened in the years ahead, especially if some of our Arab neighbors join us in influencing the Palestinians to get back to the table and negotiate a responsible deal – responsible and good for both our peoples.”Netanyahu, after enumerating the dangers in the region, said there may be an opening with the Palestinians because some of the Arab states “might be in a position to influence the Palestinians to adopt a more conciliatory and positive approach.”From both the Israeli and Palestinian perspectives, he said, it makes sense to “try to negotiate a real deal of a demilitarized [Palestinian] state that recognizes the nation state of the Jewish people.”Rather than doing that, he asserted, the PA prefers internationalizing the conflict. “I again call on [PA] President [Mahmoud] Abbas to again return to negotiations without preconditions,” he said, “but I also know he has very little reason to talk.”Netanyahu asked what incentive Abbas has to return to talks.“They refuse to negotiate, and then get international pressure, sanctions and boycotts on Israel for there not being negotiations,” he said. “And there are those who attempt to impose terms in the [UN] Security Council because there are no talks, and some pretend the dangers we face are not real dangers at all.”Trying to impose peace from the outside won’t work, he said, and will guarantee two things: Israel will resist these attempts, and the Palestinians won’t come to the table.