Netanyahu condemns Jewish terror, but says no comparison in scope to Arab terrorism

PM repeats what he has been saying for the last three months of Palestinian terrorism. 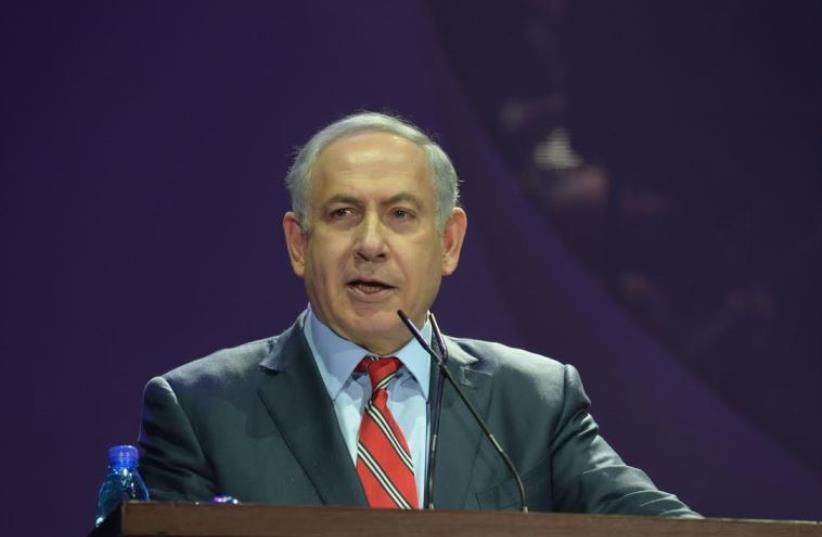 Prime Minister Benjamin Netanyahu speaks at a Jerusalem event marking 25 years to the beginning of the massive wave of immigration from the former Soviet Union
(photo credit: AMOS BEN-GERSHOM/GPO)
Advertisement
Prime Minister Benjamin Netanyahu repeated on Thursday what he has been saying for the last three months of Palestinian terrorism: that Israel has seen worse, will win this round as it has previous ones, and that the Palestinian Authority continues with its incitement.Speaking at a Jerusalem event marking 25 years to the beginning of the massive wave of immigration from the former Soviet Union, Netanyahu once again praised the security forces, this time for thwarting three attacks on Thursday. He noted that that many of the parents of those in the security forces came to Israel in the wave of Soviet aliya. “The forces in the police, Border Police, IDF and Shin Bet (Israel security Agency) are acting with courage and determination against the attackers,” he said, repeating what he has said on numerous occasions over the last three months. “In parallel, the Palestinian Authority is continuing it's lying incitement against Israel, and is certainly not working against it.”Netanyahu said the security forces have full freedom of action in the territories, and are going where they need – making arrests and demolishing the homes of terrorists. “We are acting against the families cooperating with the attackers,” he said. “Taking away their freedom of movement, imposing closures on their villages and closing off roads. We are also acting against incitement on the social media.”Netanyahu, taking pains to show a jittery nation that the security services are acting against the rampant attacks, mentioned that the Shin Bet recently uncovered a Hamas terrorist cell near Jerusalem planning suicide attacks.“The Shin Bet acts in accordance to the law and protects the state and its citizens,” he said, once again defending the organization, which has come under attack from the right-wing for allegedly torturing Jewish terror suspects.Referring to the video of extremist Jews celebrating at a wedding the murder of Palestinian toddler Ali Dawabshe and his parents, Netanyahu dismissed those who celebrated with guns and knives as part of an extremist fringe.“That is not the proud religious Zionism that contributes to the state, and whose sons serve in the elite units in the army,” he said. “It is also impossible to compare the scope of that terror with Arab terror. In the last month they [Arabs] carried out hundreds of attacks against us, and we saw just a few Jewish terrorist attacks.”Nevertheless, he said, Israel will not tolerate any type of terrorism, from any side.“This fringe group does not represent the right, it is not the right that I know,” he said. “Israel is a land of the rule of law. We will not tolerate a situation where a particular group refuses to accept the laws of the state, and carries out acts of murder.“Without the security branches, including the Shin Bet, where would be be?” he asked. “Anyone who is worried about the security of Israel has to act against terrorism, that is what we had done, and will continue to do.”