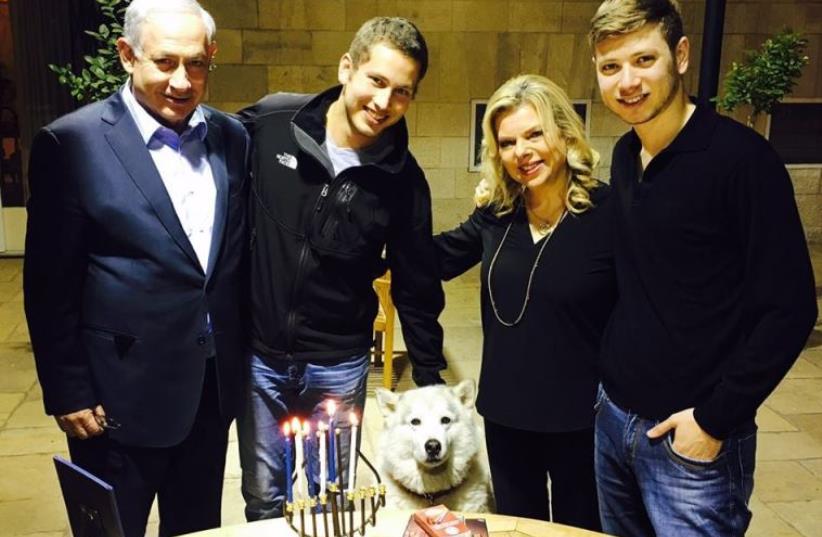 The Netanyahu family poses with dog Kaiya in front Hannuka candles, December 11, 2015
(photo credit: FACEBOOK)
Advertisement
Prime Minister Benjamin Netanyahu called on Friday for a re-appraisal of the country's quarantine laws for dogs after his dog, Kaiya was quarantined after biting two guests at a Hanukka party on Wednesday night.In a Facebook post on Friday, Netanyahu wrote that the night before he and his family lit the Hanukka candles before “we were sadly compelled to place Kaiya in quarantine as obligated under the law.”“As a result of this incident I became aware of the issue of dog quarantines and found flaws that are not consistent either with reason or compassion,” he wrote. “I will ask the relevant authorities in the health and agriculture ministry and the animal protection societies to formulate recommendations to change and improve the existing law.”The dog, brought home in July by one of Netanyahu's son from a pound before she was to be put down, bit Likud MK Sharren Haskel, a veterinary nurse, and Or Alon, the husband of Deputy Foreign Minister Tzipi Hotovely at a Hanukka party at the premier's official residence in Jerusalem on Wednesday night.The dog reportedly also bit Netanyahu in the summer.In August Netanyahu posted a picture of him and the mixed-breed dog on his Twitter account with the following message: “How much light Kaiya brought into our home! If you want a canine, find an adult dog to rescue. You won't regret it!”