After succeeding in his bid to expand the government, Prime Minister Benjamin Netanyahu revealed that he has also discovered ancestral expansion. 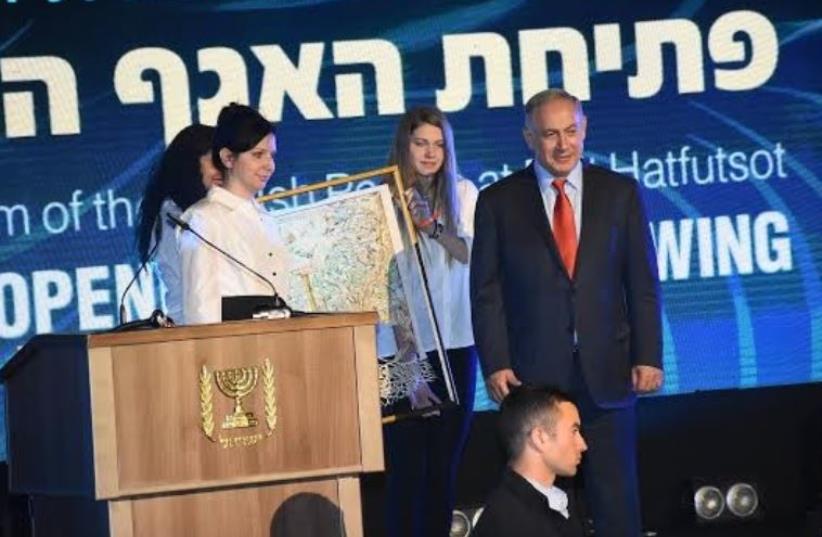 Irina Nevzlin, chair of Beit Hatfutsot board of directors, presents family tree to Prime Minister Benjamin Netanyahu
(photo credit: AVIV HOFI)
Advertisement
After succeeding in his bid to expand the government, Prime Minister Benjamin Netanyahu revealed that he has also discovered ancestral expansion.Netanyahu was speaking at the gala inauguration of the new wing of Beit Hatfutsot – The Museum of the Jewish People, where Irina Nevzlin, the chairwoman of the museum’s board of directors, presented him with a gold leaf family tree designed by artist Ira Ovolsky, based on information in the museum archives.Netanyahu examined it for a moment and then stated that it was incomplete. While the Netanyahus were aware of the Lithuanian background of their forebears and of the fact that they belonged to the family of the Gaon of Vilna, new ancestral information had recently come to light, said the prime minister.His brother Ido, who had been approached for DNA testing for descent from the Jews expelled from Spain, willingly submitted to the DNA swab, and it transpires that they are indeed of Spanish Jewish blood.Netanyahu did not say whether his Sephardi roots were on his maternal or paternal side.Fully aware of the educational significance of Beit Hatfutsot, Netanyahu said that it should be visited by every Jew. He added that he would also speak to the education minister to ensure that it is visited by schoolchildren, with the aim of strengthening Zionist identity.Nevzlin, whose billionaire father, Leonid Nevzlin, saved the museum from collapse during the tenure of prime minister Ariel Sharon, gave credit to Jewish Agency chairman Natan Sharansky, who had introduced Sharon to her father, who heads the Nadav Foundation.Sharansky had seen the potential of the museum and strongly believed that it was worth saving.Former US senator Joseph Lieberman, who is the honorary chairman of the Beit Hatfutsot board of governors, said that when he was growing up, there was a common Yiddish expression “Shver tzu zein a Yid” (“It’s difficult to be a Jew”), “but tonight I feel it’s good to be a Jew,” he said. “We are the people of memory and also the people of destiny. We are the eternal people.”Declaring the current period to be “the best time for the Jewish people,” Lieberman, emphasized that it is the best time not only for the Jews of Israel but also for those in the United States, noting that no other country outside of Israel has ever given Jews so much opportunity, success, respect and influence.Lieberman also thanked Sharansky for bringing Leonid Nevzlin to Beit Hatfutsot.The new wing is the permanent house of the impressive Alfred H. Moses & Family Synagogue Hall, and has models of the styles of ancient and modern synagogues from around the world as well as largescreen videos of synagogue services. “For 2,500 years, the synagogue was the center of Jewish life,” said Moses. Inside the synagogue Jews felt as if they were in Israel, he stated.The new wing also houses the Milton and Tamar Maltz Family Gallery, which has interactive exhibitions built around diverse Jewish heroes.The opening exhibitions that went on show on Tuesday includes one dedicated to Operation Moses on its 30th anniversary, in which some of the children who came at that time are featured as adults and tell their stories.Another exhibition is Forever Young, celebrating the life and times of Shabtai Zisl Zimmerman aka Robert Zimmerman, best known as Bob Dylan, in celebration of his 75th birthday. He was born on May 27, 1941.