Netanyahu: Israel will not allow 'drizzle' of rocket fire from enemies

Liberman says Israel has no intention of initiating any military action in Gaza, but urges Hamas to "take responsibility, impose order and calm down." 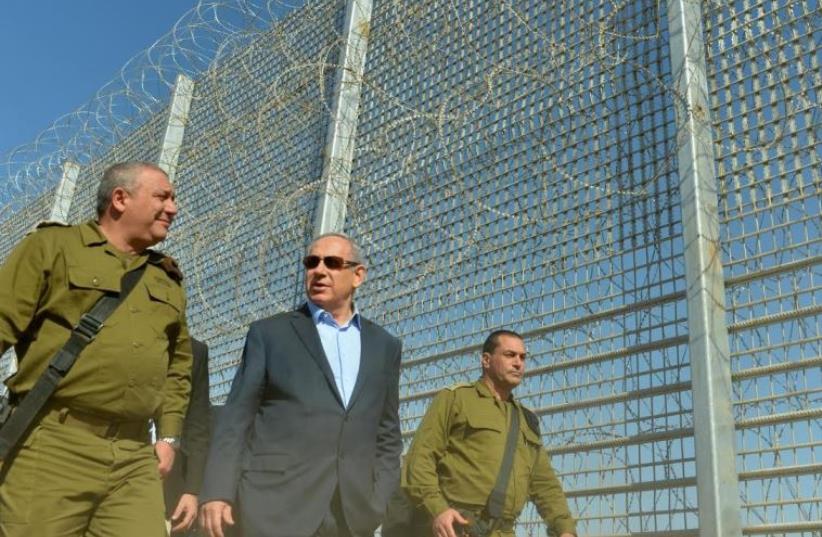 Prime Minister Benjamin Netanyahu (C) tours Israel's southern border with Jordan, February 9, 2016
(photo credit: KOBI GIDON / GPO)
Advertisement
Prime Minister Benjamin Netanyahu on Monday reiterated his warning that Israel will not allow any "drizzle" of rocket fire on its territory from enemy entities. "We respond to all fire at our territory; thus we did today and as such we will do in the future," the premier underscored hours after a projectile launched by terrorists exploded in an open field in southern Israel overnight. Meanwhile, Defense Minister Avigdor Liberman stated that while Israel has no intention of initiating any military action in Gaza, “we have no intention to continue to absorb drizzles (of rockets out of the Strip).""We will not get into a ping-pong situation of fire and counter-fire. I suggest Hamas take responsibility, impose order and calm down," Lieberman said in public remarks to legislators of his Yisrael Beytenu party in Jerusalem.
Netanyahu warns Hamas after weekend of rocket fire from Gaza [March 2016]
No group immediately laid claim to the rocket attack. However, in retaliation to the strike, the IDF struck multiple Hamas terror targets in Gaza as the military holds the Palestinian terror group responsible for any fire originating from the Strip.Taking to Twitter, Hamas evaded responsibility for the rocket launching and accused the IDF of escalating tensions with Gaza.There were no injuries or damage in Sunday's rocket attack on Israel.There have been several rockets launched at southern Israel in February, including two incidents in which the Islamic State group in the Sinai fired a barrage of rockets towards the southern city of Eilat. Three of the projectiles were intercepted by the Iron Dome missile system while a fourth landed in open territory.Two weeks ago, following a previous rocket attack, Netanyahu told reporters in London that his directives are to respond with force to every missile attack.“The two-and-a-half years since Operation Protective Edge were the two quietest years since the Six Day War,” he said, adding that Israel will be steadfast in responding to every attack, and not permit a “drizzle” of missile attacks that go without a response.Anna Ahronheim, Reuters and Adam Rasgon contributed to this report.