Netanyahu: Racism is against Jewish ethos 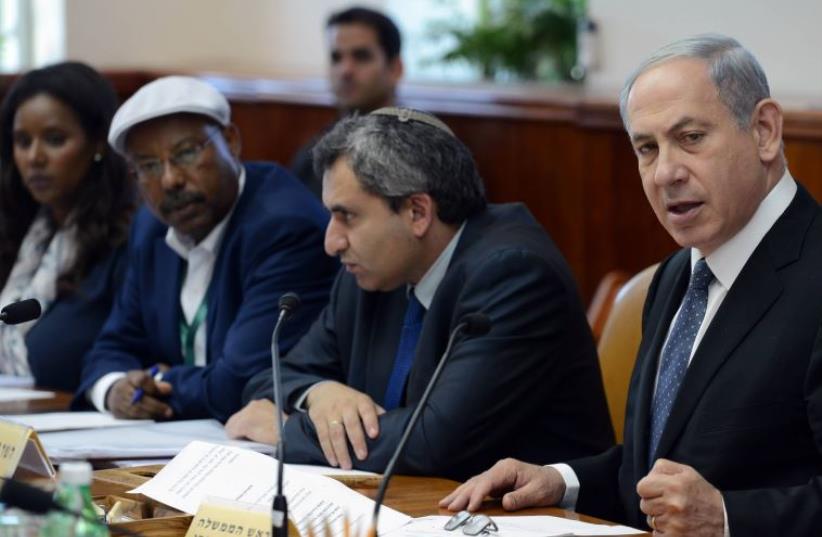 Prime Minister Benjamin Netanyahu opens ministerial committee to integrate Ethiopians‏
(photo credit: "BRING BACK OUR BOYS" CAMPAIGN)
Advertisement
Less than a month after a series of violent protests by Ethiopian-Israelis against police brutality and discrimination, Prime Minister Benjamin Netanyahu convened the first meeting Tuesday of the inter-ministerial committee he set up to deal with the community’s grievances.“Racism,” Netanyahu told the committee, “contravenes the ethos of the Jewish people.We cannot accept this in the Jewish state and we will fight it.”The prime minister said that it is “infuriating” to think that people are discriminated against, or afraid to walk the country’s streets, because of their skin color.“We will fix it,” he said.“We will also instill there be a cultural change, not just in administrative or even legal decisions. We want to instill a cultural change in the hearts of all Israelis.”The protests in May were sparked by a video showing a police officer and police volunteer in Holon beating Damas Pakada, an IDF soldier of Ethiopian descent, for no apparent reason.The 25-year-old policeman, since dismissed, said in a Ynet interview this week that the video does not tell the whole story, and that he was called to respond to a report about a suspicious object in Holon’s Jesse Cohen neighborhood, a neighborhood where there have been organized crime-related assassination attempts.According to the account of the officer, who was not named, Pakada refused to heed his calls to distance himself from the area around a suspicious object, and continued to walk into a cordoned off area. Tough words ensued, and – according to the officer – the soldier hit him first.Netanyahu met with Pakada last month and said he was “shocked” by the video.The police officer, in the interview, said he felt a “sharp pang in his heart” when he saw Pakada meeting the prime minister.“That’s a guy who threw a punch at a policeman, who picked up a rock to throw at him. And how does it end?” the officer asked. “He gets his picture taken with the prime minister, at the prime minister’s request, like he’s getting a prize. I’d also like to meet with the prime minister and tell him what really happened there.”Netanyahu, at the start of Tuesday’s meeting, alluded to this incident, and other charges of police discrimination against Israelis of Ethiopian descent.“There are claims of discrimination by the law enforcement authorities.First of all, it needs to be made clear – everyone is obligated to completely obey the law and enforcement cannot distinguish between citizens,” he said.“While the law is the law, enforcement is – of course – enforcement. There is the question of whether or not there are steps we can take to correct excessive enforcement, if indeed this exists,” he said. “I think that we need to receive a clear picture of the situation and see what the Israel Police can do. To the extent that corrections are necessary, we will indeed make them.”Among the participants in the meeting were Immigration and Absorption Minister Ze’ev Elkin, Interior Minister Gilad Erdan, Senior Citizens, Young People and Gender Equality Minister Gila Gamliel, Economy Minister Arye Deri, Religious Services Minister David Azoulay, Likud MK Abraham Naguise, former Yesh Atid MKs Shimon Solomon and Pnina Tamnu-Shata, and representatives of Ethiopian immigrant groups.