Netanyahu later attended a ceremony in Jerusalem honoring casualties of terror attacks Wednesday afternoon, saying that he felt the pain of the bereaved families affected by terrorism. 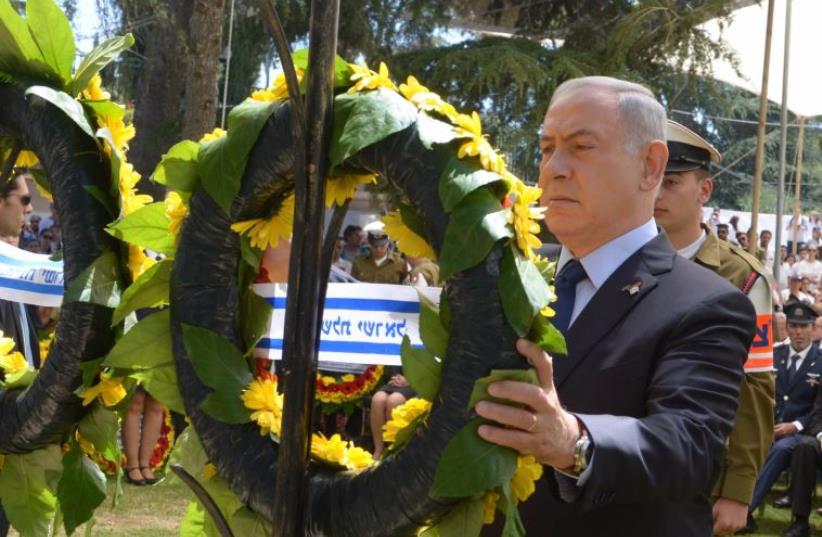 PM Netanyahu at Remembrance Day ceremony- May 11, 2016
(photo credit: KOBI GIDEON/GPO)
Advertisement
Speaking at a Remembrance Day ceremony on Mount Herzl in Jerusalem Wednesday morning, Prime Minister Benjamin Netanyahu gave a speech commemorating the fallen soldiers Israel has lost fighting for its survival over its 68 year history.
Netanyahu paid his respects to the families who have lost loved ones in the numerous wars Israel has fought over the years, saying that the whole nation was heavyhearted.
"For the bereaved families who have lost loved ones, this Remembrance Day we memorialize those who were lost, and on this day all of the people of Israel feel this agony with you," Netanyahu said.
"This Remembrance Day lends itself to internal reconciliation, which should accompany us all year long," he added.Netanyahu continued by saying: "In Israel, the boys and girls who defend our nation along with their families should feel pride" for the sacrifice they give to the country.
Netanyahu later attended a ceremony in Jerusalem honoring casualties of terror attacks Wednesday afternoon, saying that he felt the pain of the bereaved families affected by terrorism.Yet before Netanyahu was set to begin, the brother of terror victim Tzvika Cohen, who was seriously wounded in an attack in Ma'aleh Adumim in February, stood up and began shouting at the premier. "Stop being merciful towards terrorists,"cameras caught Rami Cohen saying, clearly agitated. After a moment, Cohen sat down and the ceremony continued.
"To the bereaved families, I understand your great pain," Netanyahu said as he began his speech.
He then continued and spoke the name of Dafna Meir, who was killed earlier this year in her home by a Palestinian terrorist, leaving six children behind.Netanyahu added: "Our enemies do not accept us being here,  they see all of us as vulnerable targets."
Tuesday evening marked the start of Remembrance day, where Israel pays tribute to the 23,447 casualties of war and terrorism. The day is ushered in with a 2-minute long siren which began at 8 p.m.
The Defense Ministry said there were 68 casualties in the past year, and 58 disabled IDF veterans died of their wounds.
According to the Defense Ministry, there are 16,307 bereaved relatives in Israel today, including 9,442 families, 4,917 war widows and 1,948 orphans up to 30 years of age.The Defense Ministry expects some 1.5 million Israelis to visit military cemeteries across the country throughout Wednesday.
Advertisement
Subscribe for our daily newsletter