Netanyahu said that Israel is greatly interested in ties with Brazil and believes they have great potential. 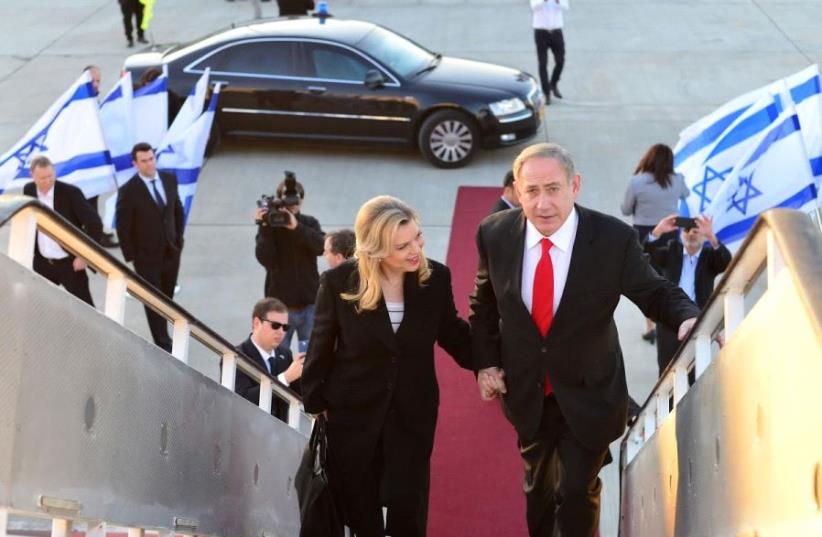 Prime Minister Benjamin Netanyahu and his wife, Sara, board a flight to Britain, February 5, 2017
(photo credit: KOBI GIDEON/GPO)
Advertisement
Prime Minister Benjamin Netanyahu is expected to make a historic visit to Brazil in June, Ambassador to Brasilia Yossi Shelley told The Jerusalem Post on Tuesday after Netanyahu met with visiting Brazilian Foreign Minister Aloysio Nunes.Until Netanyahu visited Argentina, Colombia and Mexico last September, no sitting Israeli prime minister had ever been to Latin America. Netanyahu has been talking about a visit to Brazil for months, and Nunes formally invited him during their meeting.Shelley said that Netanyahu accepted the invitation, but conditioned it on the upgrade of the trade agreement between the two countries, which is expected to be completed by then. Netanyahu, according to the Prime Minister’s Office, expressed a desire to enhance bilateral cooperation and said that Israel is greatly interested in ties with Brazil and believes they have great potential.Nunes’s visit – he arrived on Sunday evening for three days – is a sign of a significant warming of ties between the two countries that began when President Michel Temer took office in August 2016 after his predecessor Dilma Rousseff was impeached and removed from office.Both Rousseff’s term, and that of her predecessor President Luiz Inacio “Lula” da Silva, were marked by tension with Jerusalem that peaked when Brazil refused to accept Netanyahu’s nomination of Dani Dayan as Israel’s ambassador because he was a former settlement leader who lived beyond the Green Line.“That issue is behind us,” Shelley said.While Brazil’s then foreign minister José Serra came to Israel briefly for the funeral of Shimon Peres in 2016, this is the first working visit of a Brazilian foreign minister since 2010, when da Silva came accompanied by a number of cabinet members, including his foreign minister.Nunes is the highest ranking Brazilian official to visit the country since. After a long period of hardly any high-ranking visits from Brazil, there have been four ministerial visits since Temer took office.Science and Technology Minister Ofir Akunis is scheduled to travel to Brazil on Wednesday, making him – according to Shelley – the first Israeli cabinet member to visit the country in four years.Brazil is scheduled to go to elections in October, and – according to Shelley – each of the leading candidates would be as least as positively disposed to Israel as Temer, meaning that the ties between the two countries are expected to continue to strengthen.Shelley said that Brazil, like India, China and Russia, is interested in tapping into Israel’s technological and agricultural expertise, especially since agriculture is a big part of the Brazilian economy, and since the country is facing a serious water problem in the north.In addition to meeting Netanyahu, Nunes also met on Tuesday with President Reuven Rivlin and said his visit was made to “reaffirm our friendship and cooperation in a range of issues. We could be doing so much more.”During his visit, Nunes will also travel to Ramallah for meetings with Palestinian officials.