"I don't welcome diplomats from other countries who visit Israel and at the same time meet organizations that call our soldiers war criminals," Netanyahu said in a Bild interview. 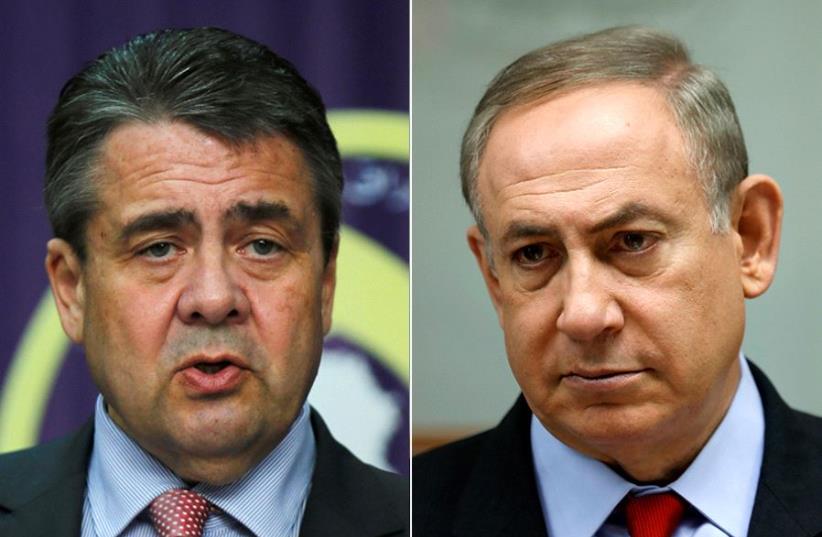 Netanyahu and Gabriel
(photo credit: REUTERS)
Advertisement
In unusually strong language, Prime Minister Benjamin Netanyahu blasted German Foreign Minister Sigmar Gabriel for lacking sensitivity for victims of the Holocaust and endangering the security of the Jewish state with his support of an anti-Israel NGO.Netanyahu, speaking to Germany’s highest circulation paper Bild on Friday, said, “I find it extremely tactless for such a meeting [with left-wing NGOs Breaking the Silence and B’Tselem] to take place at this time. On this day, we mourn the murdered members of our people and our fallen soldiers.”Monday was Holocaust Remembrance Day in Israel.Gabriel opted to meet with hard-left NGOs instead of Netanyahu earlier last week. Breaking the Silence uses anonymous testimonies to claim that IDF soldiers commit war crimes.“My basic principle is simple,” Netanyahu said, “I don’t welcome diplomats from other countries who visit Israel and at the same time meet with organizations that call our soldiers war criminals. The Israeli army is the one force that keeps our people safe today.“Breaking the Silence is not a human rights organization. They deal only with criminalizing Israeli soldiers,” Netanyahu continued.Netanyahu told Gabriel on Monday that he would not meet with him if the foreign minister went ahead with his meetings with the NGOs. In response, Gabriel snubbed the prime minister and refused to take Netanyahu’s call. Germany’s Foreign Ministry disputes the account.German Chancellor Angela Merkel on Friday defended Sigmar Gabriel.Merkel said she often meets civil society groups during her foreign travels, adding that the dispute “changes nothing in our conviction that support for the State of Israel is part of our raison d’état.”Gabriel is one of the most left-wing foreign ministers in German history. He considers Palestinian Authority President Mahmoud Abbas to be his “friend” and his party declared a “strategic partnership” with Abbas’s Fatah party. Gabriel has also gone to great lengths to boost trade with the Islamic Republic of Iran. His party held an exhibit for Breaking the Silence at the party’s headquarters in 2012 in Berlin.