Netanyahu thanks Croatia for support in international forums

Efraim Zuroff, the chief Nazi-hunter of the Simon Wiesenthal Center took Netanyahu to task for not citing instances of Croatian Holocaust revisionism. 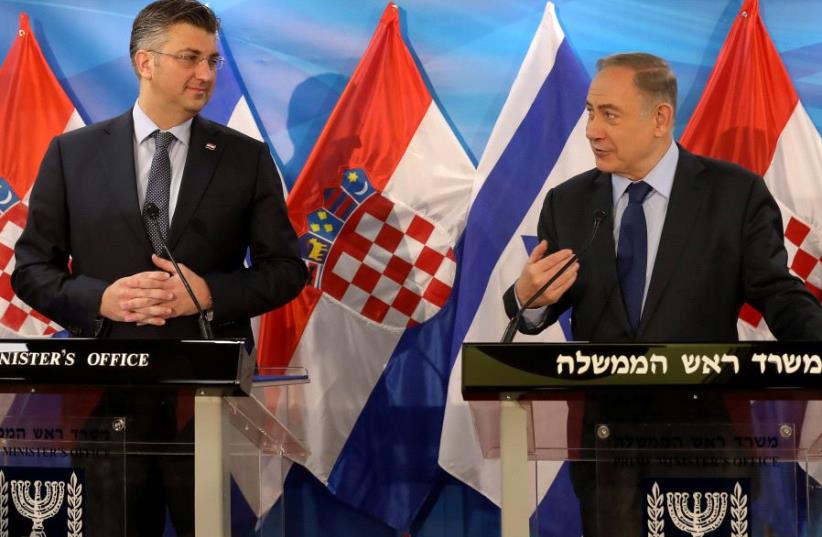 Israeli Prime Minister Benjamin Netanyahu (R) and his Croatian counterpart Andrej Plenkovic deliver joint statements to the media in Jerusalem January 24, 2017.
(photo credit: REUTERS)
Advertisement
Countries who support Israel in international forums deserve Jerusalem’s recognition, both Prime Minister Benjamin Netanyahu and President Reuven Rivlin made clear in their meetings Tuesday with visiting Croatian Prime Minister Andrej Plenkovic.“We’ve seen a great improvement in our relations in recent years, and I want to thank you especially for your strong support in international forums,” Netanyahu said during a photo opportunity with Plenkovic.“In European forums, in the UN and elsewhere, you stood very clearly and very firmly for the truth, which means standing for Israel.”Croatia, which joined the EU in 2013, is one of the countries Israel occasionally turns to inside the EU to advocate on its behalf. It also generally abstains or votes with Israel on key EU votes at the UN. Plenkovic became Croatia’s prime minister just three months ago.Rivlin also expressed the country’s appreciation, saying ,“I want to thank you for Croatia’s support for Israel in the international arena.”Netanyahu said there is a need to strengthen economic and technological cooperation between the two countries.In addition, the two nations are increasingly cooperating in firefighting and dealing with emergency situations.He pointed to Croatian fire-fighting planes that were sent here during the devastating fires in November.“We are living in a world of great challenge and opportunities,” Netanyahu said. “The challenge is clear, there are destabilizing forces throughout our region, some of them are sending armaments into your region, to the entire world and we have to fight this militant Islamist terrorism together. But we also want to achieve an international order of some balance and stability to allow security and prosperity for our peoples.”Efraim Zuroff, the chief Nazi-hunter of the Simon Wiesenthal Center and director of the center’s Israel office and Eastern European affairs, took Netanyahu to task for not citing instances of Croatian Holocaust revisionism during the public part of his meeting with Plenkovic.Zuroff said that, while he appreciates Israel’s need to preserve and nurture its friendly ties to Eastern European nations, the Jewish state nonetheless “currently has enough leverage to find ways to express its concern over Holocaust revisionism and abuse of Holocaust memory without necessarily harming bilateral ties.”He added that Israel “seems more eager to present itself to receive various compensations for Holocaust-related abuses than it is willing to stand up for the memory of the victims and assume the obligations connected with being the Jewish state.”JTA contributed to this report.