The prime minister and his wife spoke about the UN and their big trip to Latin America before boarding their plane headed for Argentina. 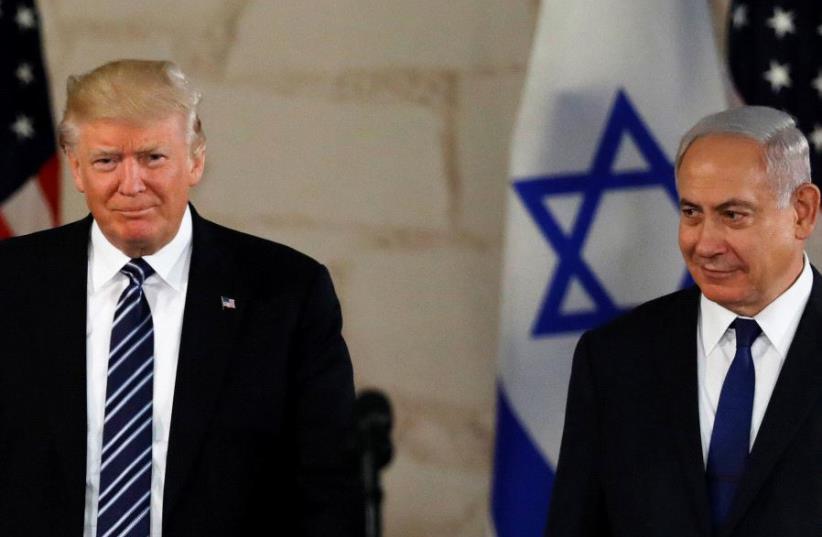 US President Donald Trump stands next to Prime Minister Benjamin Netanyahu before delivering an address at the Israel Museum in Jerusalem May 23, 2017
(photo credit: REUTERS)
Advertisement
Prime Minister Benjamin Netanyahu will meet US President Donald Trump on the sidelines of the UN General Assembly, the prime minister said Sunday before boarding a plane to Argentina."I look forward to our meeting, to my meeting with President Trump, my friend, in New York," he said, speaking to reporters. Before his speech to the General Assembly in New York on September 26, the prime minister will be visiting several countries in Latin America, marking the fifth time in some 15 months Netanyahu embarks on ground-breaking trips to countries never before visited by a sitting prime minister. The trip is part of Netanyahu’s oft-stated goal of expanding and upgrading Israel’s ties with countries beyond North America and Europe, where Israeli diplomatic efforts have traditionally been focused.The prime minister is scheduled to arrive in Argentina Monday for a day-and-a half visit, during which he will meet with President Mauricio Macri, open an economic forum, take part in separate ceremonies commemorating the terrorist attacks against the Israeli Embassy there in 1992 and the AMIA Jewish community center building in 1994, and participate in an event with the Jewish community.From Argentina, Netanyahu will continue to Colombia and Mexico. The prime minister offered Mexican President Enrique Peña Nieto assistance over the phone after the magnitude 8.1 earthquake that shook his country last Thursday.Sara Netanyahu will also be traveling with the prime minister.
Netanyahu hails "new day" in Israel-US relations after meeting with Trump (credit: REUTERS)
In her first public response to the charges levied against her, she thanked the "thousands, thousands, thousands of Israeli citizens and people around the world who support me and help and encourage"  before boarding the plane with her husband.There will be good days and bad days, the prime minister's wife said, and her supporters give her strength to do "the real things I do for people who need help."She didn't address the substance of the charges.The prime minister also sent his regards to those suffering from Hurricane Irma."This storm too shall pass," he said.