Netanyahu rarely addresses Knesset committees other than his legally-mandated regular briefings to the Knesset Foreign Affairs and Defense Committee. 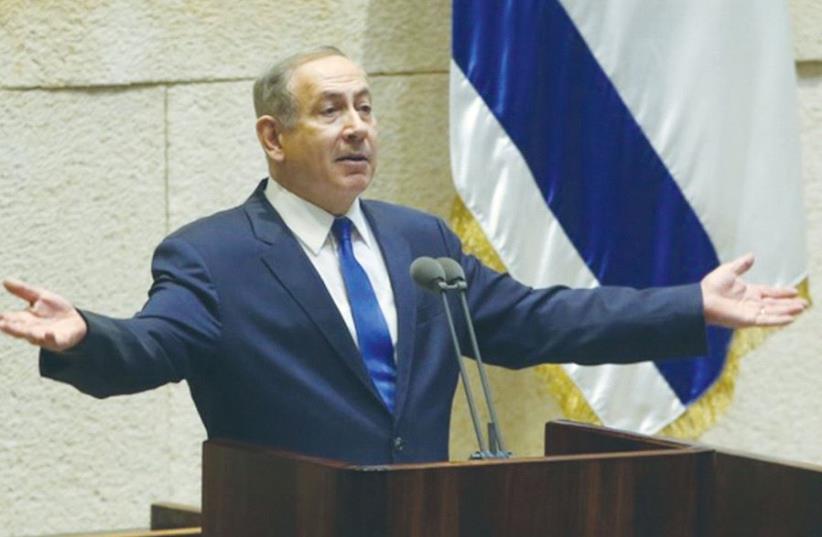 PRIME MINISTER Benjamin Netanyahu speaks during question time at the Knesset yesterday
(photo credit: MARC ISRAEL SELLEM/THE JERUSALEM POST)
Advertisement
Prime Minister Benjamin Netanyahu will make a rare appearance at a Knesset committee on Wednesday to push for Basic Law: Israel, the Nation-State of the Jewish people to be passed.Netanyahu has strongly advocated for the bill declaring Israel to be the Jewish state, and even tried unsuccessfully to make sure it would pass a first reading in the Knesset before it adjourns for its summer recess at the end of this week, saying “this a central matter; it is the essence of our existence.”Netanyahu rarely addresses Knesset committees other than his legally-mandated regular briefings to the Knesset Foreign Affairs and Defense Committee. A year ago, he defended his performance as foreign minister, another portfolio he holds, to the Knesset State Control Committee.The prime minister will appear before a special committee focused on the Jewish nation-state bill, led by Likud MK Amir Ohana (Likud), that is meant to make sure it will pass quickly.Various iterations of the bill have cropped up since 2011, when then-Kadima lawmaker Avi Dichter submitted it, and Netanyahu has supported many of them, but none have passed into law. Now Dichter, a Likud MK, has the prime minister’s backing for legislation that is almost identical to what he proposed six years ago.Justice Minister Ayelet Shaked and Tourism Minister Yariv Levin, who is the chairman of the ministerial panel meant to reach a consensus among coalition parties on the bill, will also take part in the committee meeting. They co-sponsored a version of the nation-state bill in the previous Knesset.The Jewish nation-state bill is meant to anchor in a Basic Law, legislation meant to form an eventual constitution, Israel’s status as the nation-state of the Jewish people and its Jewish and democratic character.Its proponents point out that there are Basic Laws that say Israel is democratic, but none that say it is Jewish.The proposal includes the state symbols, Jerusalem as Israel’s capital, the Hebrew calendar, the Law of Return and ingathering of the exiles.One of the bill’s more controversial elements is an article that states Hebrew is the language of the state but all government materials must be available in Arabic.Currently, there is no law that says Israel has an official language at all, but Hebrew is the de facto official language, and many see Arabic as the second official language. There are some laws requiring some public services, such as road signs and food labels, to be available in Arabic.Another section of the bill states that all communities in Israel have the right to preserve their culture, heritage, language and identity, have days off for their holidays and build their own, separate communities, and that the holy sites of all religions will be protected.Another much-disputed article of the bill is one that says the principles of the Jewish heritage should serve as inspiration to the judiciary.Joint List MKs, among others, oppose the idea of a law that says Israel is the Jewish state, calling it inherently discriminatory.