Netanyahu: Trump policy is good for Israel, region and world 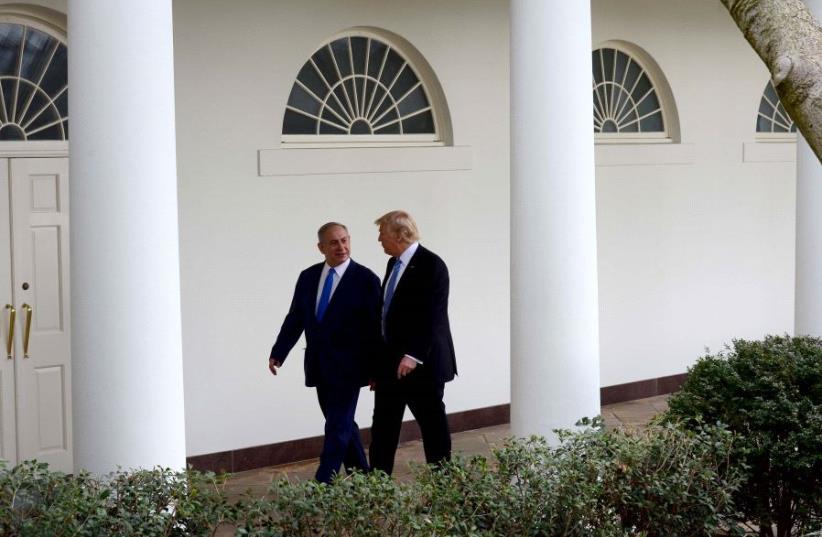 Prime Minister Netanyahu and President Trump
(photo credit: AVI OHAYON - GPO)
Advertisement
Prime Minister Benjamin Netanyahu congratulated US President Donald Trump for taking an “important step” on Tuesday toward denuclearizing the Korean Peninsula, and drew a link between North Korea and Iran.“President Trump has also taken a firm stand against Iran’s efforts to arm itself with nuclear weapons, and also against its aggression in the Middle East,” Netanyahu said. “This is already having an effect on the Iranian economy. President Trump’s policies are good news for Israel, the region and the entire world.”Trump mentioned Iran in his more than one-hour press conference on Tuesday. Alluding to his decision last month to withdraw from the Iranian nuclear deal, known as the Joint Comprehensive Plan of Action (JCPOA), Trump indicated that his tough moves on Iran have already had an impact.“I think Iran is a different country now,” he said. “I don’t think they are looking as much to the Mediterranean and so much at Syria like they were, with total confidence. I don’t think they are so confident right now.”Trump added, however, that “I hope, at the appropriate time after the sanctions kick in – and they are brutal on what we put on Iran – I hope they come back and negotiate a real deal. Right now it is too soon for that.”Former Foreign Ministry director-general Dore Gold said that the signing in Singapore of a statement of commitment to the denuclearization of the Korean Peninsula is “a bad day for Iran, and a good day for Israel, because the Iranians will be weaker today.”The developments, Gold said, leave Iran now “more isolated in its uncompromising position on the development of weapons of mass destruction.”He added that even with the US withdrawal from the JCPOA, there is still a struggle over the future of the deal.Gold, the head of the Jerusalem Center for Public Affairs, said that Trump suggested that future negotiations over an improved Iranian deal might emerge, and that “part of the debate has been whether a better agreement is even possible.”According to Gold, while the details of the denuclearization of the Korean Peninsula remain vague, the deal will serve as a precedent.“If Trump will succeed in bringing about the dismantling of North Korea’s ballistic missile capabilities, Europe cannot argue anymore that it is not possible to get a better deal with Iran than what was already reached,” he said.Though acknowledging that there are no details yet of the North Korean denuclearization plan, Gold said it will likely not include the right to enrich uranium, or a “sunset clause” whereby restrictions on nuclear development would be removed after a certain time – which were both parts of the JCPOA, and key reasons for Trump’s opposition to it.Meanwhile, Knesset Speaker Yuli Edelstein met South Korean Ambassador Choi Yong Hwan on Tuesday and expressed his hope that the process initiated in Singapore by Trump and Kim “will lead to a similar process in our region.” Just as South Korea is threatened by North Korea, Israel is threatened with nuclear weapons by Iran, he said, adding that: “We must put an end to this.”“This is a tremendous step, not only for South Korea but for the entire world,” Edelstein continued. “This will be a long process, but the outcome may be revolutionary. A few years ago, we could not have imagined that such regimes would give up their weapons and power, and I hope that this process that begins today will create a desire for similar processes in the Middle East.”Regional Cooperation Minister Tzachi Hanegbi also made a connection between the developments in Singapore and Iran, saying that what happened in Singapore was a “mortal blow to the radical axis led by Iran.”Acknowledging that this was just the beginning of a long and exhaustive process, Hanegbi said that: “The bottom line right now is praiseworthy: [that] Trump’s strong and uncompromising policies are proving themselves.”Zionist Union head Avi Gabbay, meanwhile, drew parallels with the Palestinians, saying in a tweet that: “what happened between the United States and North Korea could also happen in the Middle East and elsewhere. It does not sound logical, until it happens.”Gabbay said that, as in all negotiations, the best path forward is through creating trust – even when that seems impossible – and finding common interests. “This is only the first step, but leadership with the courage to initiate can make all the difference.”