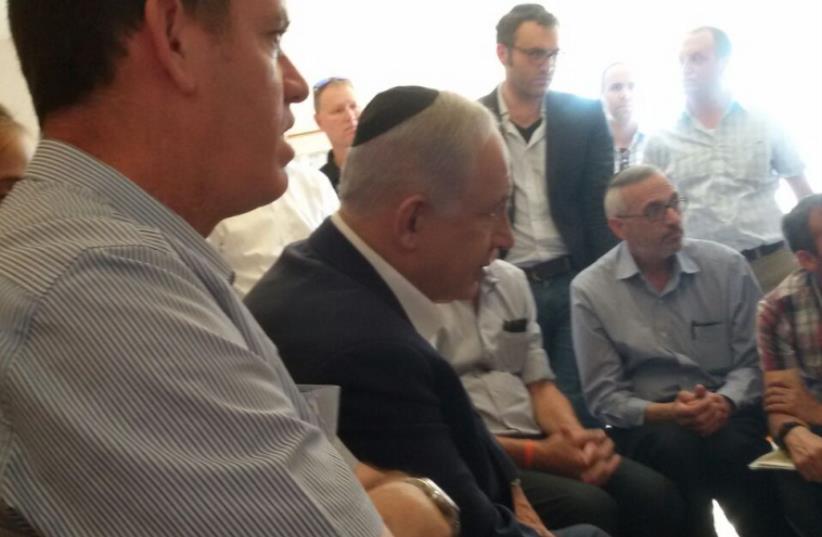 PM Netanyahu at family home of slain teenage terror victim in Kyriat Arba
(photo credit: COURTESY/HAVERIM LE'SHAAT TZARA)
Advertisement
Prime Minister Benjamin Netanyahu on Friday visited the family of 13-year-old Hallel Yaffa Ariel, who was murdered Thursday morning as she slept in her Kiryat Arba bedroom after a terrorist from a nearby Palestinian village sneaked inside and stabbed her to death.The premier was also accompanied by Defense Minister Avigdor Liberman and Agricultural Minister Uri Ariel.

During the meeting, Netanyahu commended the family's strength during such a difficult time, and promised to discuss with Liberman ways to help prevent similar attacks in the future."We will stregthen together here," Netanyahu told the family. "I will sit with the defense minister and we will decide how to strengthen this community," he added.On his departure, Netanyahu said that "to see Hallel's room, to see the bloodstains there at the side her bed and on books and clothes of this little girl, it's shocking.""And it reminds us once again who we are and what we are facing," Netanyahu continued. "They want to uproot us, but will deepen our roots. They will not force us out of here."Netanyahu concluded by stating that acts of terror will not succeed in breaking the soul of the Jewish people and will not force Jews to abandon their homes."I was very impressed with this wonderful family, they will not break their spirits and they will not succeed in breaking our spirit."On Thursday morning, Hallel was sleeping in the first-floor bedroom that she shared with her two sisters, Shira Ruth, eight, and Kana, four.Everyone was out of the house, when Muhammad Tarayrah, 17, breached the settlement’s fence, setting off an alarm that alerted residents to stay indoors.According to Israel Security Forces, Tarayrah slipped into Hallel’s bedroom through an open window and stabbed her multiple times. He was still in the house when the settlement’s security team arrived, including Hallel’s stepfather, Amichai, who was part of the team.They shot and killed Tarayrah and found Hallel by her bed.A Magen David Adom paramedic said that when he arrived at the scene the teenage girl was unconscious and not breathing. They were able to resuscitate her at the scene, but it was touch-and-go during the ride to Shaare Zedek Medical Center in Jerusalem, as they fought to keep her alive.She was pronounced dead shortly after her arrival, without ever regaining consciousness.The murder, which came as the international community is pushing Israel and the Palestinians to renew the frozen peace process, set off a political firestorm, with rightwing politicians blaming Palestinian incitement for the attack and others on the left accusing the government of stagnation.
Advertisement
Subscribe for our daily newsletter