Sharan is suspected in bribery, fraud, breach of trust and Conspiracy to commit a crime. It was reported that the Israel Police extended his arrest in five days. 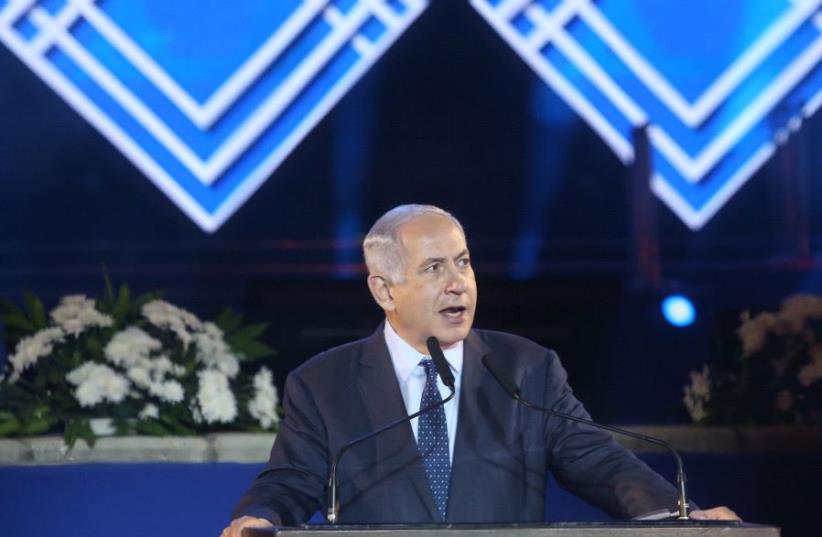 Israeli Prime Minister Benjamin Netanyahu speaks at a memorial ceremony honoring the fallen of Israel's Six Day War in Latrun on Monday June 5, 2017.
(photo credit: MARC ISRAEL SELLEM/THE JERUSALEM POST)
Advertisement
Prime Minister Benjamin Netanyahu’s former chief of staff David Sharan was arrested on Sunday in what is dubbed as the “submarines affair,” or Case 3000.Sharan is suspected in bribery, fraud, breach of trust and conspiracy to commit a crime. It was reported that the Israel Police extended his arrest in five days.Case 3000 is a police corruption investigation into Israel’s purchase of German-made naval vessels, in which Prime minister Netanyahu is not a suspect.Attorney Eitan Maoz who represents Sharan said that he has a rich record of public service, and that the subject he was questioned on is old.“I do not understand why they keep him detained,” Maoz added, “if he wanted to disrupt the investigation he could of done that a long time ago.”Maoz also stressed that Sharan does not intend to become a state’s witness, neither was he offered a deal. He said that this kind of deal is impossible in light the nature of his questioning.Judge Einat Ron from the Rishon Letzion Magistrate court, who issued the permission to extend the arrest, said that large amount of material has been gathered in Case 3000, and it is in its preliminary stages. She added that because of the nature of this complicated investigation, there are not alternatives to the arresting procedure.Along with Sharan, Natan Mor and Tzachi Lieber, two political strategists were arrested. It was reported that it is suspected that they used to transfer bribe money to state officials.Reports hold that Sharan was questioned over events the took place while he was serving under minister Yuval Steinitz, when he was the the Knesset Foreign Affairs and Defense Committee chairman. On Sunday police arrested three more suspects, including a former commander of the Israeli Navy's Shayetet 13 commando unit, former OC Navy V.-Adm. (res.) Eliezer Marom and other former high-ranking military officers. It was reported that Marom, who was questioned in this case before, was released after the questioning. Former Shayetet 13 commander’s arrest was extended until Wednesday.Channel 10 news reported that in the next round of police questioning, active military officers might be summoned for questioning as well. Police conducted searches in the suspects’ homes and offices in order to find documents that could be relevant to the investigation. It is still unknown whether the police will ask to extend their detention. Police stated that the six - including Sharan, the strategists and the former military officers - were questioned over finance-related and moral offenses.Reports stated that this round of police questioning came in light of revelations made in Miki Ganor’s testimony.  Ganor was the Israeli representative of German shipbuilder ThyssenKrupp and became a state’s witness in the "submarines affair” in late July.Ganor’s testimony focuses on deals he conducted with the Defense Ministry, but its details is under a gag order. It was reported that a senior police figure said that Ganor “provides great material” for the investigation.Channel 2 News reported that former Deputy National Security Adviser Atalia Rosenbaum was also questioned in the case. The main suspicion against her is that she leaked information from National Security Council meeting to Miki Ganor.It was said that Ganor promised Rosenbaum to buy her an apartment - a promise he never delivered, according to the report.Meanwhile, also on Sunday, former prime minister;s house manager Meni Naftali and the state prosecution argued over his status and whether to label him a "state witness" since he is expected to testify on behalf of the state against Sara Netanyahu if she is indicted in the Prime Minister's Residence Affairs.Naftali's lawyer has declared to the prosecution that Naftali "is not a state witness and never was a state witness. Even more, Mr. Naftali will not serve as a state witness and any such agreement or other inference for interpretation is hereby nullified."Speaking to the Jerusalem Post, Naftali explained that the Netanyahus and even the state prosecution are attacking his reputation by framing him as a state witness.A state witness is usually arrested by police, interrogated and presented with the option by police that he can cooperate with them and get lenient treatment or face heavy jail time.Naftali said, "they want to present me as a criminal" so they are calling him a state witness, but that he never referred to himself as a state witness.In contrast, he said he approached the police on his own initiative offering them evidence in the Sara Netanyahu cases in exchange for immunity should any issue he raises also have an impact on him legally.He said this made him fundamentally different from a state witness and that he should be treated differently on all levels.Legally speaking a "state witness," because of their background, also is given less credence by courts and requires supporting evidence to be the basis of a conviction.   The prosecution responded to Naftali citing a range of instances in which he and his lawyer referred to him as a state witness, as having immunity or as having the immunity that state witness' receive.Ultimately, Naftali's legal status when he testifies against Sara, should she be indicted, may have to be settled by the trial court.