“Whoever wants to learn Torah should continue to do so, we don’t want to carry out belligerent operations here, we want to help those interested in serving but who don’t have the right information." 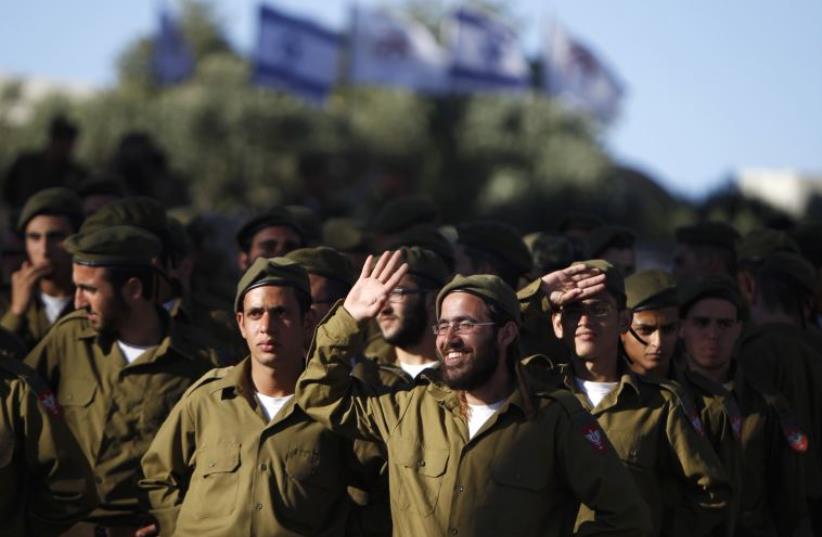 IDF soldiers of the Netzah Yehuda Haredi infantry battalion are seen during their swearing-in ceremony in Jerusalem
(photo credit: REUTERS)
Advertisement
The IDF has established a body within its Manpower Directorate to centralize efforts for increasing the number of haredi men enlisting in the army. The move comes as the Knesset gears up once again to legislate on this thorny issue.The new directorate will come under the authority of Brig.- Gen. Adi Shani, who heads the Planning and Administration Division of the IDF’s Manpower Directorate. It will be headed by a colonel, and staffed by three majors, including a military rabbi, along with another 10 officers and a total of approximately 30 staff members.Speaking to The Jerusalem Post, Shani said that the main role of the new body is to increase the number of ultra-Orthodox men enlisting, as well as defining enlistment targets for the army, creating policy for integrating them into the IDF, preparing them for military service, helping them obtain professional training during their service, and preparing them for life once they leave the army.Shani spoke in particular about the efforts, which have been under way for some time, of personnel within the new directorate whose job is to visit haredi institutions – in coordination with their leaders and rabbis – to encourage enlistment.These soldiers visit various haredi institutions, and circulate in popular hang-outs in haredi cities for youth who have dropped out of institutional frameworks, to present them with the opportunities available to haredi men who enlist in the army.“We aren’t seeking to be provocative, go into Ponevezh Yeshiva and start promoting enlistment there,” said Shani, in reference to one of the most prestigious haredi yeshivot in Bnei Brak.“The way to integrate haredim is to provide avenues that allows them to serve... to make it understood that you can serve in the IDF and remain haredi without damaging your haredi lifestyle, and to give this opportunity to anyone who wants to serve.”Shani noted that “not everyone is suited to become a Torah scholar,” and that those who come to this realization have the option of serving in the army while preserving their haredi identity.He also pointed out that there are many ultra-Orthodox youth who are not studying in yeshiva but who are also not enlisting, despite being obligated to since they are not in full-time study, and that the directorate would be targeting such young men for enlistment as well.“Whoever wants to learn Torah should continue to do so. We don’t want to carry out belligerent operations here; we want to help those interested in serving but who don’t have the right information, and those who perhaps aren’t interested in enlisting but aren’t learning in yeshiva either. And there are more than a few in that category,” Shani said. There are approximately 6,200 haredi men currently serving in the IDF, including 390 commissioned and noncommissioned officers.In the enlistment year 2016, which ran from July 2016 to June 2017, 2,800 haredi men enlisted to the IDF, a significant increase over the 2,145 who signed up in the 2015 enlistment year. Indeed, haredi enlistment figures have been on the increase since at least 2013, when 1,972 joined up.However, although the absolute number of haredi men enlisting has been increasing, the number of haredi males turning 18 every year is also rapidly increasing, meaning that the proportion of each cohort signing up for military service remains flat at about 30% of the potential number of enlistees every year.This is one of the major challenges that the new directorate will have to address.