Meir Panim has established restaurant-style soup kitchens throughout Israel to give the look and feel of a real restaurant.

By JERUSALEM POST STAFF
Menu
(photo credit: SHUTTERSTOCK)
Advertisement
“He who is generous to the poor makes a loan to Hashem; He will repay him his due.” (Proverbs 19:17)When most people think of a soup kitchen, the image is usually that of a tattered building in a unadmirable part of town where the poor line up to receive their daily rations. The feeling of judgement, uncertainty and anxiety are factors that cause hesitation to those who can’t afford to buy food, but need a lot of help. Those below or hovering slightly at the poverty line would rather remain hungry than compromise their pride by going to a soup kitchen.But one organization in Israel came up with a solution. That organization is called Meir Panim (brightening faces). Meir Panim has established restaurant-style soup kitchens throughout Israel to provide the look and feel of a restaurant. No questions are asked and all are welcome. Volunteers serve patrons a hot dish filled with protein, healthy sides and fresh salads. 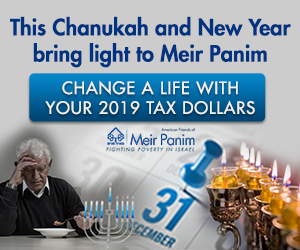 Most of all, the volunteers are there with a big smile and a big heart. To put this to a test, five boys from Yeshivat Lev Hatorah visited the Jerusalem restaurant-style soup kitchen on Tuesday, December 17. To their surprise, the food was at the level of an upscale restaurant. The Meir Panim branch in Jerusalem makes all food on location. The boys learned about the challenges poor people face throughout Israel, and the experience made them think deeply about caring for others who are impoverished.Meir Panim is incredibly grateful to the support of neighboring hotels, partnerships and above all, donors like you who make an incredible impact to bring comfort to Israel’s impoverished population. Our restaurant-style soup kitchens are integral to bringing joy and hope. Your funding will help and ensure that meals are provided on an ongoing basis.Meir Panim relies on donations from generous people throughout the world to continue its programming. Any amount will help, not only feed an empty stomach in Jerusalem, but also in Dimona, Sderot, Tiberias, Or Akiva and Safed. Our Meal’s on Wheels program continues to help the elderly, home bound and disabled. Above all, we serve with absolute dignity. There’s no better good deed than that, in maintaining a no-embarrassment, modest process for the needy.Now’s your chance to get involved with such a tremendous cause. Join Meir Panim’s fight against hunger. This Hanukkah and the year's end, when you make your tax deductible gift, you can be the light that makes change happen.