New TV options are on the way for Israeli viewers

Keshet and Reshet are getting channels of their very own. 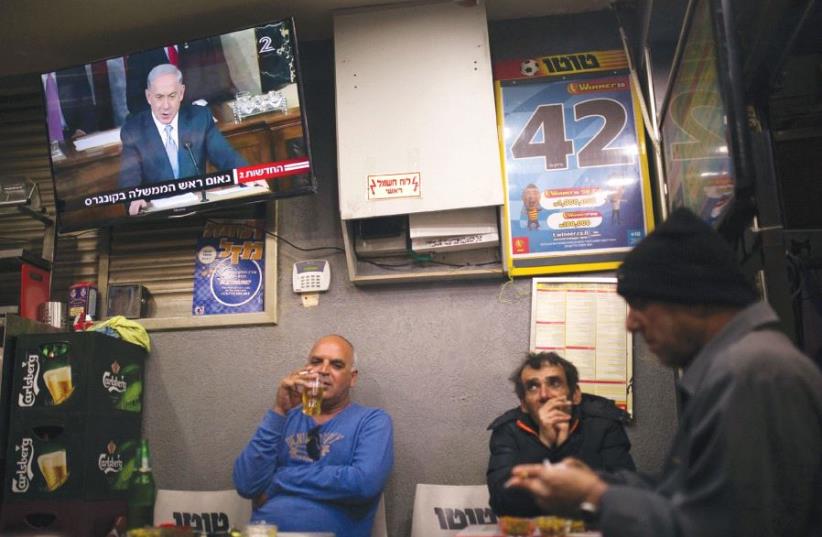 PEOPLE SIT at a kiosk in Ashkelon as a television broadcasts Prime Minister Benjamin Netanyahu’s speech to the US Congress on March 3, 2015.
(photo credit: REUTERS)
Advertisement
Come November, television viewers will have additional options from which to choose their preferred programs. Keshet and Reshet are breaking away from Channel 2 in which they shared airtime, and each is getting a channel of its own. Keshet will broadcast on Channel 12 and Reshet on Channel 13.Despite the fact that each of the two production companies will have their own independent television channel, they will continue, for the coming three years, to share the News Corporation, which currently broadcasts on Channel 2. The new legislation, which was introduced to effect the split and drum up more competition in the communications industry, allows them to continue to share the News Corporation but in all likelihood they will change its name to signify that it is no longer part of the Channel 2 line-up.Thus the news and current affairs programs that are currently aired on Channel 2, will from November onward be aired simultaneously on channels 12 and 13.The Money Program, hosted by Keren Marciano, will disappear from Channel 2 and move to Channel 12. The late-night news program will move from Channel 2 to channels 12 and 13.The popularity of reality shows is waning here and around the world, which poses considerable challenges to program innovators of the four commercial channels as well as to public broadcaster IBC’s Kan, as well as to Educational Television, which is slated to merge with Kan next year.Commercial television came here in November 1993, and completely revolutionized home entertainment.The television timeline in the country started with experimental black-and-white programs in the early 1960s for Educational Television, which actually preceded Channel 1. Israel Television, later known as Channel 1, and now Kan 11, began broadcasting in April 1968, with coverage of the Independence Day parade reported by Haim Yavin, who in later years became known as “Mr. Television,” and was frequently compared to America’s Walter Cronkite.Color television was not sanctioned until 1981, but the price was prohibitive and the cost of a 22-inch set was equivalent to roughly 2-3 months salary. Commercial television more than a decade later was considered to be a big deal, though some residents, depending on where they lived, did have previous access to more than one channel if they could pick up Jordan, Egypt, Syria or Lebanon airwaves.Some liked to compare Jordan’s Hebrew news broadcasts with those of Israel. Several years later, Egypt also began broadcasting news in Hebrew.