In its editorial, the Grey Lady cites the recent United Nations report, which raised suspicions of possible war crimes committed by both Israel and Hamas. 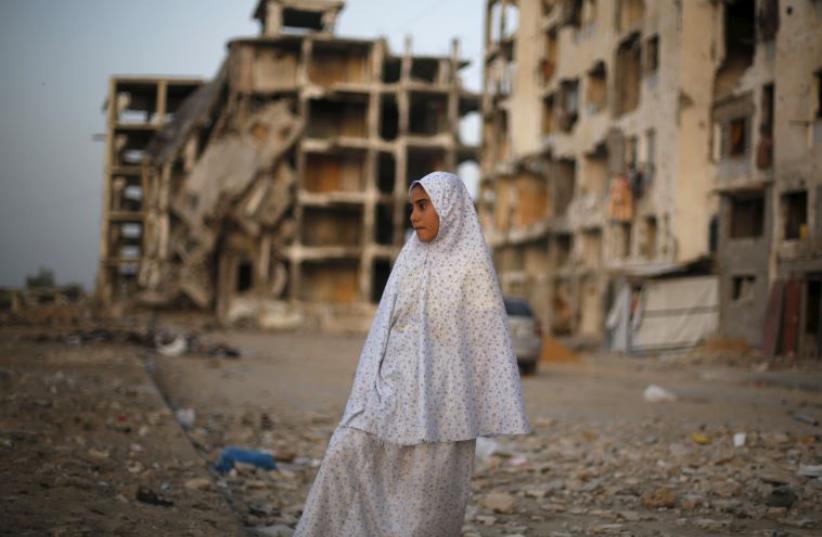 A Palestinian girl stands near residential buildings that witnesses said were heavily damaged by Israeli shelling during a 50-day war last summer
(photo credit: REUTERS)
Advertisement
The New York Times editorial board on Tuesday placed the onus on Israel to investigate and prosecute alleged war crimes committed by its soldiers during Operation Protective Edge.In its editorial, the Grey Lady cites the recent United Nations report, which raised suspicions of possible war crimes committed by both Israel and Hamas.“The United Nations report on last year’s Gaza war is another marker of the deadly, endless struggle between Israelis and Palestinians,” the Times wrote. “It found ‘serious violations of international humanitarian law’ that ‘may amount to war crimes’ by both Israel and the Palestinian militants during a 50-day war that killed 2,251 Palestinians, including 1,462 civilians, and destroyed 18,000 homes in the Gaza Strip.”
Yonah Jeremy Bob discusses implications of UN Gaza report‏
The Times criticized Prime Minister Benjamin Netanyahu for dismissing the report and for refusing to cooperate with the UN probe.While also taking Hamas to task for indiscriminately firing rockets into Israel during the 2014 conflict, the editorial said that it expects Israel to try soldiers and officers believed to have violated international law during the operation.“The report is expected to serve as the basis for a fuller investigation into possible war crimes by the prosecutor of the International Criminal Court,” the Times wrote. “It is unrealistic to expect Hamas, which the United States and other countries consider a terrorist group, to comply with international law or police itself.”“But Israel has a duty, and should have the desire, to adjust its military policies to avoid civilian casualties and hold those who failed to do so accountable,” the editorial read. “Absent some kind of peace agreement with the Palestinians, another war in Gaza seems inevitable.”