NGO calls on supporters of Israel to stand strong against Sussiya

Regavim is a watch-dog group that monitors illegal Palestinian construction and has been one of the petitioners to the High Court of Justice against the village. 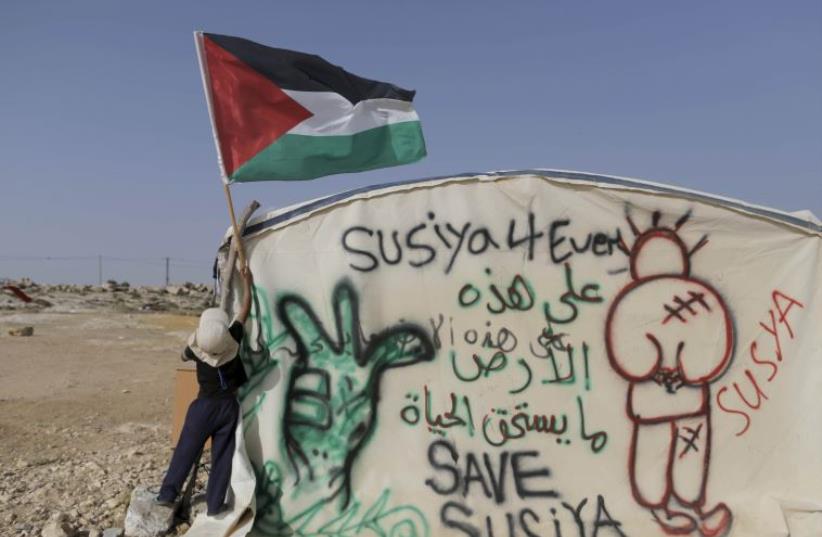 A Palestinian boy places a Palestinian flag on a tent in the West Bank village of Sussiya
(photo credit: REUTERS)
Advertisement
Those who support Israel at home and abroad should let their voices be heard as the government battles against international pressure to legalize the West Bank village of Sussiya, the NGO Regavim said on Tuesday.“I know that it is not easy. I know that the world community, the European Union, the State Department, anti-Israel NGOs are pressuring our government to let the illegal squatters remain in their current location,” said Josh Hasten, who is Regavim’s international director.“Let the prime minister know that with all the pressure, the State of Israel, the people of Israel, are behind him,” Hasten said.His watch-dog group monitors illegal Palestinian construction and has been one of the petitioners to the High Court of Justice against the village.At issue is a request by some 45 Palestinian families in the South Hebron Hills to rezone their agricultural lands to allow for temporary and permanent housing.The lands in question are located a short distance away from an Israeli settlement of the same name (Sussiya) and next to an archeological site, which houses the remains of a synagogue dating back to the 4th and 5th centuries.Defense Minister Avigdor Liberman is expected to submit his opinion on the matter to the High Court of Justice on Wednesday.Left-wing non-governmental groups and activists from Israel and abroad have rallied around the village. The United States and the European Union have pressured Israel to submit an option to the High Court that would legalize the village and authorize its homes by approving a zoning plan.The government, however, has been under pressure from right-wing politicians, activists and groups like Regavim to tell the High Court that the village should be demolished.They have argued that the collection of tents and modular structures are not a village but an illegal encampment that is part of a strategic drive by the Palestinian Authority to strengthen its hold on Area C.“This is a litmus test to see if the government of Israel is willing to uphold the laws of the land,” Hasten said in a video he produced in advance of Liberman’s expected opinion.“We are calling on people to get involved and to strengthen the prime minister and the defense minister to uphold the laws of the land and to remove this illegal encampment.“This will send a clear message to everyone around the world that the laws of this democratic country of Israel can not be broken,” Hasten said.Sussiya, however, is not the only case in which the demotion of Palestinian homes is pending.According to the UN, as of last week Israel had demolished 614 unauthorized Palestinian structures in the West Bank, many of them were modular constructions.On Tuesday, however, it destroyed seven concrete structures in the Palestinian village of Sair (north east of Hebron), displacing 41 people.The Civil Administration said in response: “The necessary warrants regarding these buildings were sent prior to the carried out enforcements.”