A delegation of Druse community leaders were in the ultra-Orthodox neighborhood for the event. 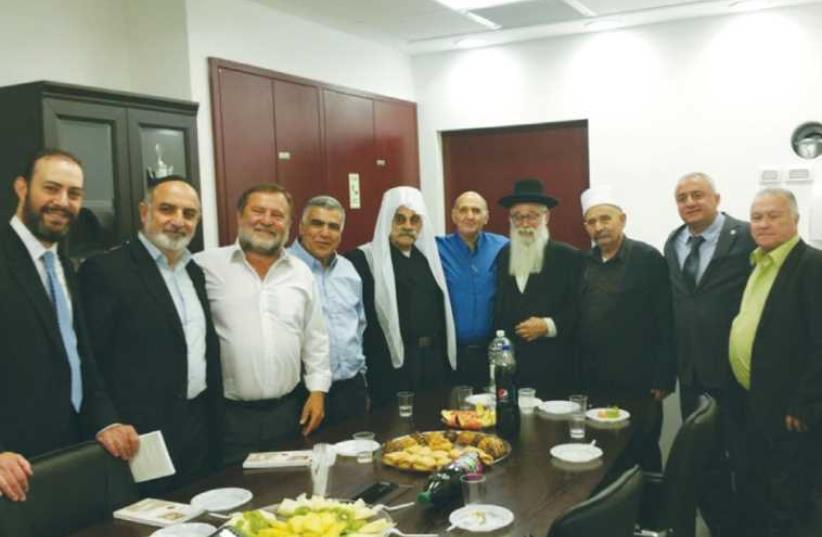 JEWS AND DRUSE attend the launch of the Brit Haim NGO in Jerusalem’s Har Nof neighborhood
(photo credit: Courtesy)
Advertisement
The Druse-Jewish Brit Haim (Covenant of Life) NGO held an event marking its founding at a community center in Jerusalem’s Har Nof neighborhood on Tuesday, honoring a Druse policeman killed defending a synagogue there in November.The NGO’s main objective is to aid Druse security personnel and families of slain security personnel and offer scholarships to those who finish their service, Rafi Halabi, Brit Haim’s spokesman, told The Jerusalem Post.A delegation of Druse community leaders were in the ultra-Orthodox neighborhood for the event.Brit Haim was established a few weeks ago with the aid of businessman Moshe Indyk, and the goal of promoting good relations and supporting the Druse community, said Halabi.The event honored Zidan Saif, the 30-year-old Druse traffic policeman from Yanuh, near Acre, who died of a gunshot wound suffered during the November 18, 2014, terrorist attack at the Kehilat Bnei Torah synagogue. His daughter was four months old when he died. Members of his family attended the ceremony.“Today, Indyk gave two scholarships to two Druse students,” Halabi said, adding that the intention is to distribute 100 scholarships per year worth NIS 10,000 each.Two men from Jerusalem’s Jebl Mukaber neighborhood, armed with a meat cleaver and a gun, killed four worshipers before they were shot and killed by police. The terrorists had worked at a grocery store near the synagogue.Israel Police Insp.-Gen. Yohanan Danino eulogized Saif at his funeral, saying the officer “ran into the heart of the murderous inferno, without fear, without concern,” and that he “endangered himself for the security of the citizens of Israel.”Danino credited Saif for stopping the rampage and saving many lives.The funeral also was attended by members of the haredi community in Jerusalem and beyond who organized buses to reach the service in the Galilee to pay their respects to the officer.The murdered worshipers – Aryeh Kupinsky, Cary William Levine, Mosheh Twersky and Avraham Shmuel Goldberg – were all rabbis.Druse MK Ayoub Kara (Likud) strongly supports the establishment of the new NGO, his office told the Post.Ben Hartman and Reuters contributed to this report.