While getting briefed about the current security state on Israel's northern border during her Israel visit, Nikki Haley was exposed to a rift between the IDF and UNIFIL concerning Hezbollah. 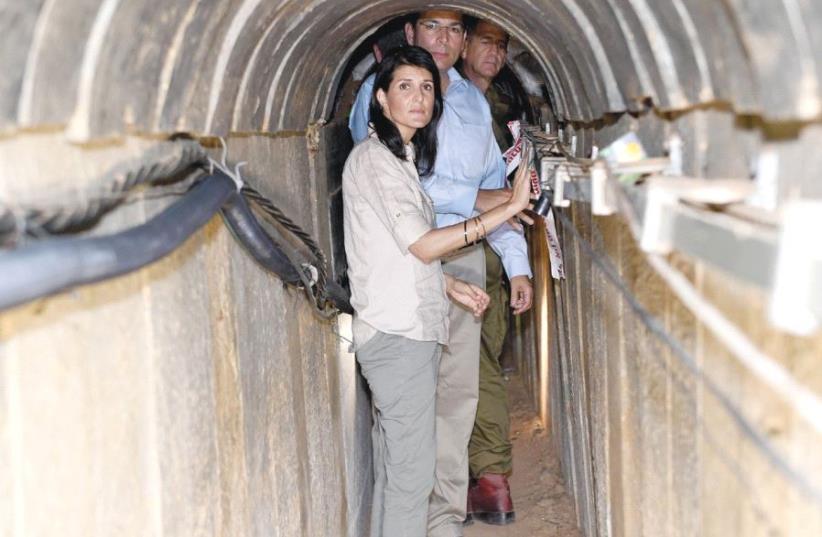 AMBASSADOR NIKKI HALEY inspects a Hamas attack tunnel into Israel that was uncovered by the IDF.
(photo credit: MATTY STERN/US EMBASSY TEL AVIV)
Advertisement
US Ambassador to the UN Nikki Haley was exposed to an unusual dispute between the IDF and the UN regarding the security state at Israel's northern border while she visited the area during her stay in the Jewish state last week, Channel 2 reported on Sunday evening. While the US envoy received an official briefing at Israel's border with Hezbollah, Maj-Gen. Michael Berry, Force Commander and Head of Mission of the UN Interim Force in Lebanon, explained that the region was relatively calm.  According to Channel 2, Maj.- Gen. Aviv Kochavi, Deputy IDF Chief of Staff and the former head of the Northern Command, could not hide his disagreement and refuted Maj.- Gen. Berry on the spot, adamantly insisting that the situation was quite to the contrary. The exchange between the two reportedly took place after Haley, who visited the border to learn about the dangers posed by Hezbollah, asked Berry whether "a change was necessary to better handle the situation on the border facing the strengthening of Hezbollah." According to Channel 2, Maj.-Gen. Berry told Haley that "the region is calm, the situation is good and there is no need for a change [in strategy]." At this point Maj.-Gen. Kochavi stepped in and retorted by saying: "I'm sorry my friend, we think entirely differently, UNIFIL don't enter villages and cities [and are therefore not as aware of the situation as the IDF is]." Maj.-Gen. Kochavi then reportedly turned to Haley and told her that "a change in instructions and in the means [for UNIFIL to act] would really enable a confrontation with Hezbollah, who are violently violating UN decisions." According to Channel 2's report, Haley was not particularly disturbed by the heated exchange she witnessed, but later told an Israeli official: "It's good that I was exposed to the argument and to the truth that you presented, it will influence moves at the UN."Last week The Jerusalem Post learned that Prime Minister Benjamin Netanyahu voiced a claim similar to Kochavi's while speaking to Haley during her stay. Anticipating the possibility of another war in Lebanon, the premier spoke to the US ambassador about promoting a UN Security Council resolution that would call to remove Hezbollah forces from southern Lebanon.
UN Ambasador Nikki Haley visits Kibbutz Misgav Am located on Israel’s northern border with Lebanon on June 8, 2017 Credit: Gil Shimon/US Embassy Tel Aviv
According to senior government officials, Netanyahu and Haley – who arrived early on Wednesday for a three-day visit – spoke about strengthening the mandate of UNIFIL, the United Nations Interim Force in Lebanon, to make it more effective in enforcing Security Council Resolution 1701, which put an end to the 2006 Second Lebanon War.

Herb Keinon and Maariv Online contributed to this report.