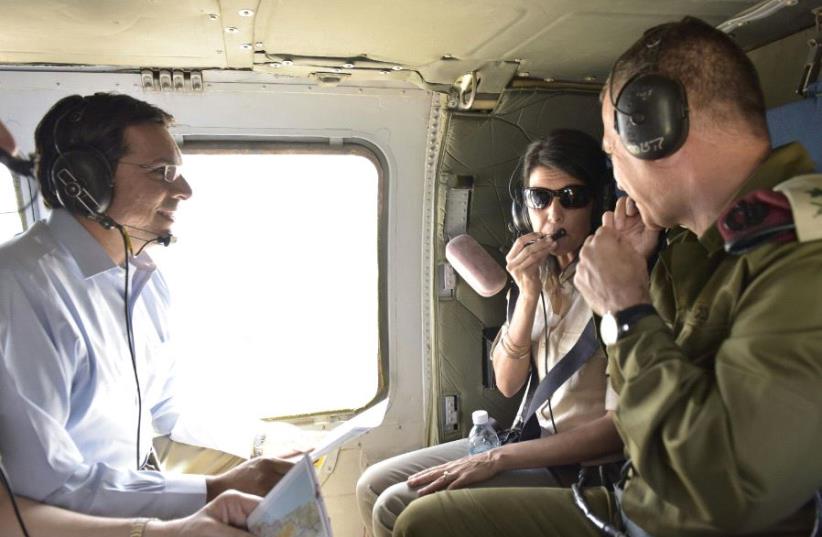 US Ambassador to the UN, Nikki Haley flies over Israel
(photo credit: IDF SPOKESMAN’S UNIT)
Advertisement
Nikki Haley, the former US ambassador to the United Nations where she was known for her staunch defense of Israel, met on Sunday with IDF Chief of Staff Lt.-Gen. Aviv Kochavi.   Haley was in Israel to support the Israel Center on Addiction and refrained from holding any meetings with Israeli politicians. Her only official government meeting was with Kochavi, who whom she discussed the threats posed by Iran, and other security issues in the region. The two’s relationship arose from a 2017 helicopter tour Kochavi, then the deputy chief of staff, gave Haley when she visited Israel as the UN ambassador.   When he was appointed the IDF chief, Haley tweeted: “Congratulations to Major General Kochavi on his appointment to Chief of Staff of the Israeli Defense Forces. The IDF is in great hands.” During that 2017 visit Haley witnessed a heated exchange between Kochavi and the commander of UNIFIL, which whom the Israel general argued that the peacekeeping force was not doing enough to stop Hezbollah in Lebanon.Haley reportedly later said that "It's good that I was exposed to the argument and to the truth that you presented, it will influence moves at the UN."