The activists were forcibly removed and escorted out of the hearing by security. 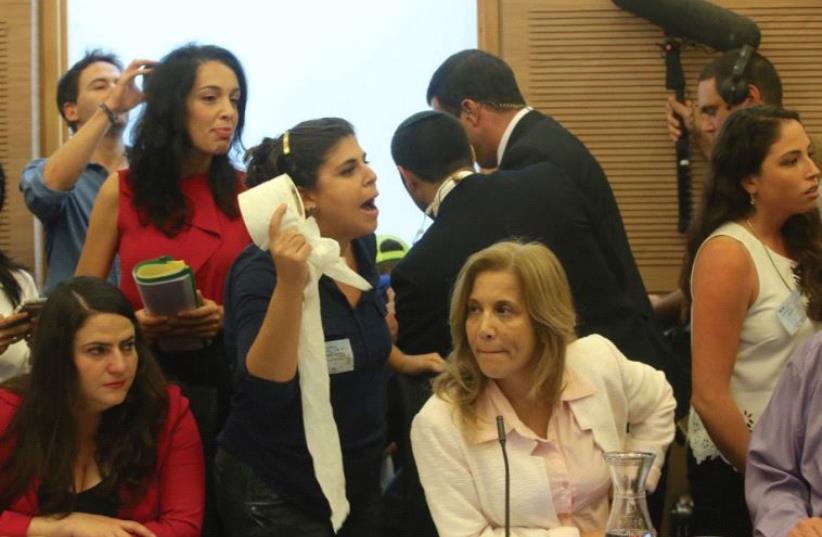 PROTESTERS FROM the North brandish toilet paper at the Knesset yesterday.
(photo credit: MARC ISRAEL SELLEM/THE JERUSALEM POST)
Advertisement
A Knesset Finance Committee meeting about the 2017- 2018 state budget on Monday got heated when activists from the North, who were protesting a lack of funding for the periphery, threw wads of toilet paper towards Finance Minister Moshe Kahlon and shouted that the “government treats the Galilee like toilet paper.”The activists were forcibly removed and escorted out of the hearing by security.The provocation was part of an ongoing protest by the municipality heads from the Galilee and Golan Heights against the lack of funding received by the North in the upcoming two-year budget, despite an announcement earlier this year of a Northern Reconstruction and Development plan totaling some NIS 18 billion.Finance Minister Moshe Kahlon responded to the criticism, saying: “We are working to assist the business sector in the North, to develop infrastructure and add additional school classes in the North.Kahlon said that he was meeting later in the day with other ministers to “formulate a strategic plan for the North.”Opposition MKs took the opportunity to criticize the budget and the lack of funding for the North, citing the coalition was failing to minimize gaps with the periphery.“The budget lacks a real plan to create growth engines in the North, which are so important for its prosperity,” said MK Erel Margalit (Zionist Union).Meretz party head MK Zehava Gal-On said the prime minister was willing to “waste billions” on closing the public broadcasting but was not willing to invest in the North. She called on the coalition and the finance minister to make “significant progress” with regards to the North.MK Stav Shaffir (Zionist Union) expressed her skepticism about the hearing, saying that it would not help the North.“Today we sit, and the decisions will be made at the end of December and in the end will not make it into the base budget,” she said.The Knesset Special Committee for Distributive Justice and Social Equality, which convened for the first time on Monday, also addressed the lack of funding for the periphery in the upcoming budget.MKs from both the coalition and opposition rallied for the cause.MK Miki Zohar (Likud), chair of the committee, said at the opening of the discussion the “discrimination between the Center and the North is unbearable.”MKs Bezalel Smotrich (Habayit Hayehudi) and Yigal Gueta (Shas) called on other coalition members not to support the budget if it doesn’t include the funding for the plan for the development of the North.“We must convey an unequivocal message to the prime minister and the finance minister that without the plan for the North – there will not be a budget,” Smotrich said.MK Hilik Bar (Zionist Union) added that, “there are two states within the State of Israel – a country between Hadera and Gedera and the rest. As the opposition, we will support any government action for the good of the North.”Outside the Knesset, some thousand residents from the North and dozens of municipality heads also protested the lack of government funding.“This is the time for the government of Israel to save the Galilee,” Eli Malka, chairman of the Eastern Galilee authorities and head of the Golan Regional Council, said. “There is a unique opportunity here to leverage the advantages and strength of the Galilee and minimize the large gaps created in all walks of life between the North and the Center and the South of the country. You cannot pass a state budget without funding the program for the North.”Ilan Or, head of the Yesod Hama’aleh Council noted that during the Finance Committee meeting Kahlon spoke about public broadcasting but not about the citizens of the North.“The government talks about bridging gaps between the North and the Center but actually the government intensifies the inequalities and social disparities. The northern plan must be budgeted,” he said.